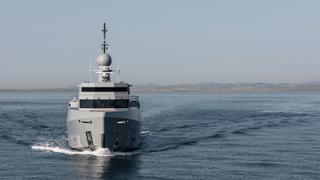 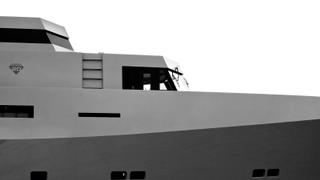 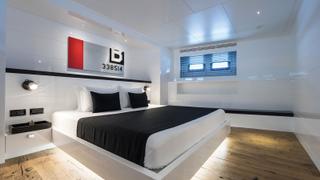 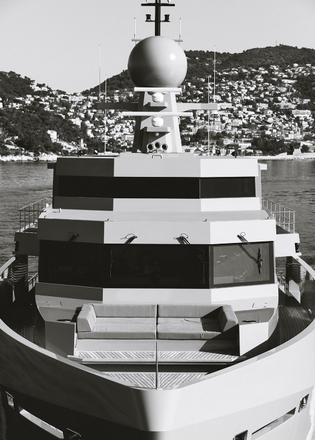 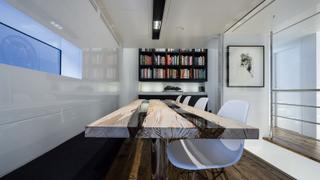 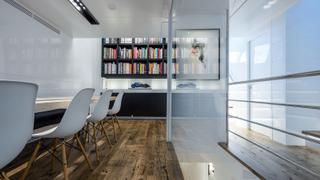 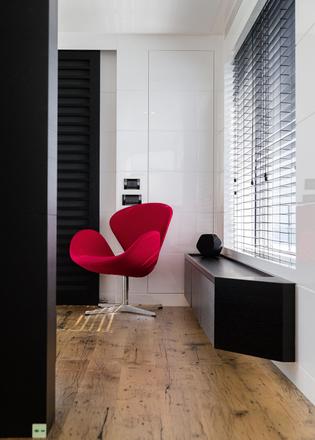 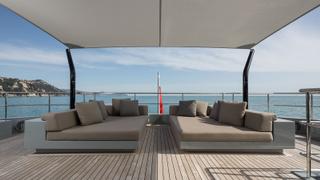 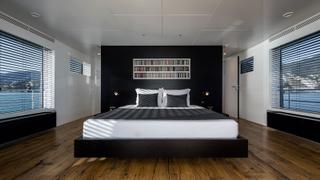 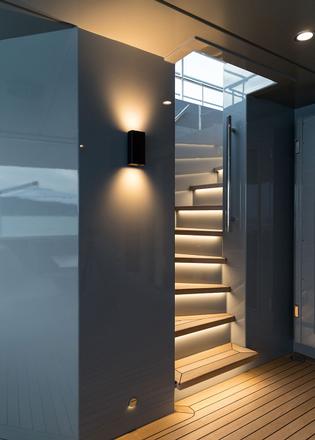 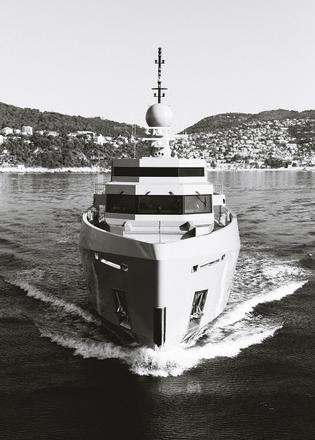 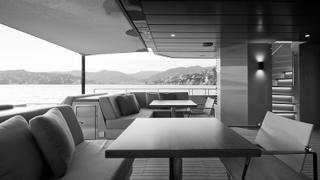 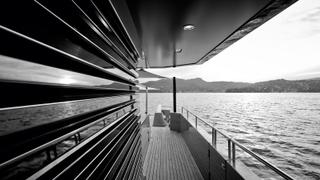 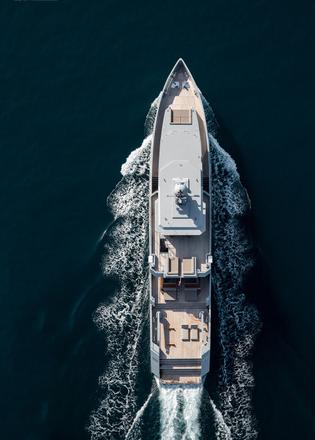 Riza Tansu has gambled again, this time with his on spec 43.7 metre Cyclone. And he has another sure-fire winner on his hands, says Sam Fortescue...

It’s not your money unless you make it yourself,” says Riza Tansu. “If someone helps you make it, you are indebted to them and they can take it away.” The designer and builder of the eponymous Tansu Yachts is explaining his philosophy of wealth, and lamenting the fact that some of his richer acquaintances are not free to spend it.

He is a self-confessed gambler, Tansu. And we are sitting aboard the floating proof of it. The 43.7 metre Cyclone that he both designed and built at his yard in Tuzla, Istanbul, was made on spec with his own money. This gleaming military-styled boat is the latest of four projects into which Tansu has sunk his personal resources. In a pattern that has repeatedly paid off, he finances the next big leap in size and design by ploughing in the profits from the previous design.

It is a strategy that has brought him from furniture design, via a wildly successful restaurant and bar in Istanbul (“with a plane hanging from the ceiling!”) to yacht design. “I decided to do something very different,” he explains. “I would build a boat and if it works, it works.” That was 20 years and 24 projects ago, and the reputation of Tansu Yachts now speaks for itself.

This latest “gamble”, christened Cyclone, looks to be no exception, as there is already strong interest from potential owners, according to Tansu. “Part of the thrill for me is going ‘all in’ on a new design,” he grins. “I hope one day I will have one not to sell, but it hasn’t happened yet. I had hoped to have this boat for a little longer…” He trails off, but the meaning is clear. Even as a self-made man, the business makes demands on him.

Tansu Yachts’ pared-down naval exterior has become Riza Tansu’s calling card, and is now imitated by many. “He sent me his design and said, ‘the most important thing in this concept is the curved transition line in the hull’,” says Hans-Maarten Bais, of Diana Yacht Design, which did the naval architecture for Cyclone. “All the rest of the boat, everything is vertical, diagonal or horizontal. At every step, everything was done to keep that line as unbroken as possible from bow to stern.”

True, the lines on Cyclone have been slightly tweaked from the previous boat in the range, Sexy Fish – the “step” in the sheer line has been ironed out into a long curve. But what is unexpected, when you step aboard, is the extraordinary contrast between the hard, aggressive lines outside, and the warmth of the interior design. For a moment, it is totally bewildering.

Stepping in, out of the wintry Tuscan rain, it takes a while to figure out what is going on. One moment you are standing on a teak deck framed by almost military lines in DuPont grey. The next you are in what feels like a family sitting room, with ancient, gnarled oak floorboards underfoot, welcoming sofas and a huge flat screen television. “Our philosophy is to have happy, comfortable and welcoming interiors,” Tansu explains. “Our simple and functional exterior design combined with beach house style interiors have been well recognised and inspired many designers since 2011.”

This is something of an understatement. Tansu yachts have won seven major international plaudits since 2011 – the latest being a Boat International Design & Innovation Award, earlier this year, for Cyclone. The judges noted that Tansu’s signature “minesweeper look” had been softened, paying particular tribute to the well-integrated superstructure, which “provides plenty of both open and protected outdoor living space while actually increasing the interior volume available to the owner”.

The interior is warm but simple. Described as “beach house” in style, with its vintage oak floorboards, it still feels rather sophisticated

Tansu’s hands-on approach to building, and the financial risk he takes with each project, results in a very personal build. As his delivery skipper Dylan Brown says, “every customer becomes a member of his family”. Has Tansu ever turned a customer down because they wouldn’t fit into that family? “Sure,” Brown says with a grin.

Cyclone hit the water in September 2017 and spent that autumn steaming around the Bosphorus, before making the 1,500 nautical mile crossing to Italy, then up to Rapallo, close to Genoa. It was a typically stormy December passage at times – the yacht ploughed on through gale-force winds and three metre seas. It wasn’t exactly fun, the skipper says, but the boat was the equal of the conditions, with her low centre of gravity, relatively broad beam and CMC Marine stabilisers. The journey took six days. “The seakeeping on this boat is amazing,” Brown says. “You’ll be coming up to a harbour feeling like you’re doing three knots, when in fact it’s more like 16 knots.”

Tansu has been on board for a couple of weeks with friends and family. The trip is partly for fun, partly for the serious purpose of honing the design for the next boats, two of which are already in build. Is there anything he wishes he had done differently? “A wardrobe for coats,” he says after some deep thought. “It’s the sort of thing you don’t notice until you come here in the winter, but it’s a pain that you have to give your coat to someone to tidy away somewhere else. I’m going to include that on all my new boats.”

The question is, where? The saloon is such a clean, clear space, it’s hard to see where you could hide a wardrobe. White gloss panelling with horizontal lines runs all around the walls, punctuated only by doors and windows and a couple of Isamu Noguchi-designed floor lamps, to which Tansu seems particularly attached. The space, like everywhere on the boat, is bereft of those odd bits of topography you’re used to seeing in yachts – no cabinets in the corner to conceal pipe runs, or technical equipment. “It’s all worked into the fabric of the boat,” Tansu explains. “To make something look so simple creates a lot of extra complexity for us.”

But the boats don’t just look simple – in some respects they are simple. Tansu has eschewed the wedding-cake succession of saloons that some yachts offer in favour of a single living area on the main deck, with two twins and a double guest cabin below, and a master cabin above. Occupying the whole of the upper deck, that cabin has a beach house feel, with floor-to-ceiling windows and patio doors out on to a private deck. The finish here is the same glossy white panelling with oak floorboards, preserving the warm, homely feel. As throughout the boat, it’s decorated simply with some of Tansu’s aviation-inspired riveted aluminium art.

The bathroom is generous but not overbearing, with unfussy marble sinks and shower, which also gives a rather fine view ahead as you get ready for your day. It’s simple and it works. True, there are plans on paper for a version of the boat with a gym and an extra deck, but Cyclone’s 325 gross tonnes is roughly equivalent to a 35 metre yacht, by Tansu’s own admission. “Our boats are relatively small in volume terms, but very clean architecturally.”

He also prefers traditional shaft drives to Volvo’s IPS pods, for instance. And he has chosen standalone Bluetooth speakers throughout instead of a complex entertainment network. The white panelling in each room is machined from marine plywood, and then painted with a lustrous, thick white – “I don’t like tricky, different materials,” he says. But it’s not cheap – the speakers are Bang & Olufsen, for instance; the twin 1,900hp Caterpillar C32 engines among the largest that the company builds for yachts, capable of getting Cyclone up to at least 20 knots.

“Our main objective is to stay away from tech challenges and keep the boat as simple and straightforward as possible,” says Tansu, pointing to the reasonable €37,000 per gross tonne cost of the boat. “We work hard on the architectural concept and try to come up with solutions within the basic design, avoiding some complex, James Bond-ish, push-button features, so that we could spend plenty of money on the top-of-the-line technical equipment, which would keep you safe and sound on the sea.”

He also believes that this lack of technical complexity makes the yacht more robust for real-life use. “Imagine, you get to the Caribbean and the push-button balcony doesn’t work. What do you do? My boats go everywhere and in all conditions.”

It’s hard to imagine much outside living as the rain pours down in Rapallo. But with the two tenders craned off the aft deck, there is prodigious space here, as well as big sunpads under the bridge windows forward. Biminis and sunshades can be rigged fore and aft on carbon poles to turn each space into a party, with fridges built into the comfortable exterior sofas. Short balconies flanking the owner’s cabin make for a more private area, and Tansu has designed a teak and stainless steel lounger for this exact spot.

Soon the rain will stop, and Italy will become the glorious sun-soaked cruising ground that draws owners and their boats back year after year. Tansu was hoping to hang on to Cyclone long enough to cruise her down the Amalfi Coast to Capri, then across to Sardinia, Corsica and up to the Côte d’Azur by the sale of Cyclone was announced in early July 2018 meaning that privilege will now belong to her new owner. No matter - with new projects on the horizon it appears that, once again, for Tansu the gamble has paid off.

This article was first published in the July 2018 edition of Boat International.

Seven: The 60m Perini Navi yacht that lights up the stage