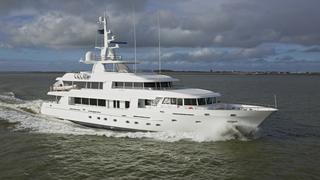 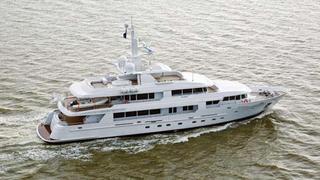 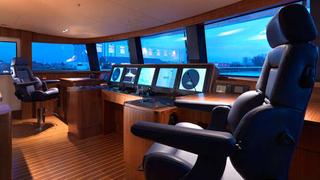 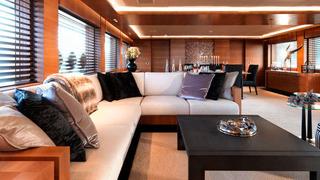 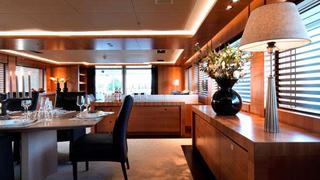 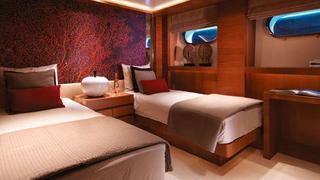 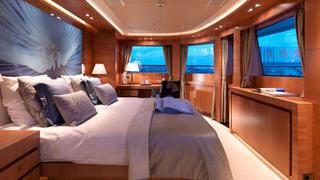 The 44m superyacht BVB 44M is one such example of yacht projects stalled by the not-too-distant financial crisis that have finally made it out of their sheds and into the water. An order was placed for a 44 metre tri-deck yacht just before the 2008 crash, but when the yacht was only partially built the owner backed out. With a yacht already in build, Bloemsma Van Breemen (BVB) in northern Holland faced a very serious problem. The project was mothballed for three years until an investment company of yachting enthusiasts financed the remainder of the construction.

The design of the boat was changed in various ways to remove some of the original owner’s quirkier design requests and to make it more universally appealing. As a result, The BVB 44M is refreshingly simple and unpretentious. The naval architecture is by Vripack and the exterior and interior is by Pieter Beeldsnijder, the man who brought us Athena and Ethereal.

Beeldsnijder has been around the business long enough to know how to produce a beautiful design, and also what is likely to work well on what is, effectively, a long-range explorer yacht. With her large fuel-tank capacity and economic propulsion, she sports a cruising range of 6,000 nautical miles at 12 knots, but such an autonomy means nothing if it isn’t paired with ample storage capacity and redundant systems.

Beeldsnijder’s interior design lends itself well to customisation to an owner’s individual taste, by selecting the right loose furniture inside and on deck, and by modifying the upholstery and the photo-panels above the beds and in the main lounge.

In terms of layout, superyacht BVB 44M, currently for sale, conforms to industry norms for a yacht this size, with an accommodation deck that comprises two doubles and two twins. On the main deck is a large saloon, galley, captain’s cabin and at a semi-raised level the bridge. On the upper deck is another saloon, serving area and owner’s suite, complete with its own private terrace forward. This deck can be configured as an entirely private owner’s deck, should the owner wish.

Up on sun deck is ample seating and sunbathing areas, a spa pool, and extensive relaxation and dining space. The central part of the sun deck is covered by a hard-top with glass panels to allow some light through while still offering plenty of shade. Interestingly, there is also a ‘crow’s nest’ (observation deck) above the sun deck with a ‘love seat’ where you get a magnificent view while underway.

The way the boat is laid out makes perfect aesthetic and operational sense, in that the guest areas flow naturally together, as do the crew areas. The crew can move about, getting on with what they need to do, without disturbing the guests, and the crew quarters themselves are spacious and well thought out.

Several aspects of the BVB 44M really stand out. Firstly, she feels so much larger than 44 metres. At 480GRT, she is making the most of every inch. The ceiling heights are generous, the cabins bigger than you might expect, and the saloons seem enormous. The interior design certainly helps the BVB 44M feel bigger than her 44 metres. Satin-finish pear wood is used to create a beautiful warmth, offset by sparing use of dark wengé accents. There is an almost Art Deco quality to the design of the cabinetry, and this carries throughout the yacht, creating a wonderfully cohesive design theme with some exquisite detailing.

As she stands (or floats) at the moment, there is no loose furniture in the saloons and public areas (the BVB 44M was dressed for our photography purposes). The owner will have the option to spec their own loose furniture and configure those spaces as they see fit. From a journalistic viewpoint, the lack of furniture was interesting. It allowed me to really see the quality of the workmanship without being distracted by Steinways or Louis XIV escritoires. And the workmanship is absolutely top-notch, oozing an understated elegance that is all too rare in these days of 23 different types of marble and 17 types of exotic hardwoods. This feels like a yacht that will immediately make any owner or guest feel relaxed, comfortable and at home.

Another surprising aspect to the BVB 44M is the level and quality of her engineering. Her deep V-shaped bow sections and steel hull (extensively tank-tested) should give her a safe, comfortable ride, even in rough seas. With a relatively light aluminium superstructure (the mast section is in composite) and a wide beam of just over nine metres, she should be a very stable vessel. What rolling motion may occur should be handled by her stabilisers.

Propulsion comes from twin 1,115hp Caterpillars through 1:4 reduction ratios in the gearboxes to 1.5 metre inboard-turning props. With maximum revs at 1,600rpm, that means the props are turning at a very fuel-efficient 400rpm at full speed. Combined with a fuel capacity of 82,000 litres, this fuel efficiency will give her a genuine transoceanic range.

Which is just as well, because this yacht is more than capable of spending considerable amounts of time cruising. Onboard storage for provisions is on a par with similarly sized full-blown explorer yachts, and she should be very capable of taking her owner to rarely visited locations.

Safety is another area where BVB has been busy. The BVB 44M was built to the LYC II and Lloyd’s Register Special Service Craft rules. She also complies with Lloyd’s chapter 17 fire regulations, meaning that she has the fire safety standards of a yacht up to 3,000GT. The lower deck comprises nine watertight compartments that use cleverly hidden watertight doors, which serve to ensure that damaged sections can be isolated. Moreover, the BVB 44M has a separate engine room, generator room, control room, pump room and harbour generator room – all sensible precautions in the event of a fire.

The main generators are housed in a dedicated soundproofed room, removing the need for sound-enclosures and making maintenance easier. The noisy systems (watermakers, air compressors) and those consuming fuel are all in the main engine room, which is cleverly cooled by means of a recycling heat-exchange system that keeps salty air of out the engine room.

If the future chief engineer will love this sort of attention to detail, the deckies should appreciate things such as the hidden gutters in the superstructure sides at upper deck and sundeck level prevent water splashing down onto the main deck when the topsides are washed down. It’s these seemingly insignificant details that will ensure a happy (and attentive) crew.

The owner and guests appreciate different things. The noise levels are pleasantly low, suggesting that BVB has put a lot of effort into sound insulation. Both the engines and the main generators feature dry silencers and water-injected exhausts, the gensets’ baseframes are flexibly mounted, the underside of the floor plates in the engine room are fitted with soundproofing material to avoid the bilges acting as a sound box, and the bowthruster tunnel features compressed air injection to minimise the noise caused by cavitation.

The guests won’t notice these things – nor will they notice any appreciable noise while on board. During sea trials, the noise levels in the master cabin were measured at 40dB(A) in port and 45dB(A) when under way at 80 per cent power. Of course, all decibel meters read differently, but in terms of a percentage increase, that’s a good set of figures.

The closer you look at the BVB 44M, the more there is to admire. She may not have had the easiest birth, but BVB’s perseverance and dedication has produced a remarkable yacht. At 44 metres she isn’t huge, but Beeldsnijder’s interior design has made the most of what she has, and you could be forgiven for thinking you were on a much larger yacht. The attention to build quality, engineering excellence, and elegant styling are superb, and as a yacht for owner, guests and crew to enjoy, she is a resounding success. Five years ago, at the depth of the financial crisis, it must have been difficult to foresee such an outcome.