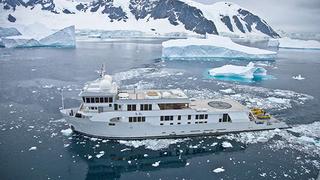 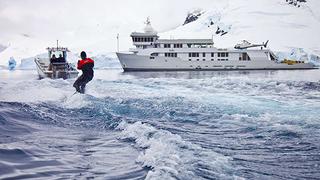 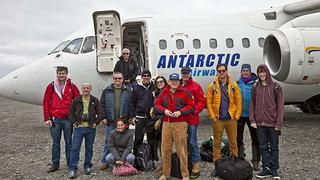 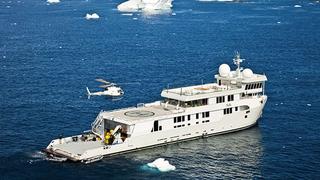 Travel to Antarctica is certainly easier now than when the first explorers risked it all on the ice for fame and glory. But as always, planning is key to a successful expedition. I had only 72 hours to prepare for the trip of a lifetime, joining the owner and his guests aboard the newly refitted expedition 63.4m megayacht SuRi. With air travel, hotel and travel insurance secured, my attention turned to outfitting for extreme conditions. Needless to say, there’s not a lot of choice when it comes to sourcing arctic ware in South Florida, and it was a scramble.

Getting there required an eight-and-a-half-hour red-eye from Miami to Santiago, Chile, then a four-hour flight into Punta Arenas. The owners’ jet touched down late the next morning and the luggage carousel began shooting out an endless stream of personal gear, galley provisions, bags of skis and snowshoes, crates of spare parts, even a box of fresh flowers. Our cargo was loaded aboard a charter plane from DAP Charters, which has been flying to Antarctica for more than 25 years and has it down to a science. With four-engine redundancy, its BAE 146-200 aircraft is well suited for the job of hauling people and things down to the bottom of the world, capable of operating from “un-improved” airfields. Un-improved is the key word—an industry term for anything resembling a dirt road.

The rest of the world may be racing into the future with the aid of technology, but in Antarctica things are pretty much as they have always been. The windiest, coldest continent on earth is also the most inhospitable.

You need to be prepared for how you are going to tackle the ice with an explorer yacht. A land of rock and ice surrounded by saltwater and more ice, it remains a place where you had better plan well—if you don’t haul it in with you, you won’t have it. There are no stores, no phone or Internet, save satellite, and no help if you get into a jam. SuRi carries a seven-seat Eurocopter AStar 350 helicopter, yet flight ops regulations in Antarctica require an additional rescue helicopter, so a Robinson R44 was added to the list of toys loaded aboard SuRi and tied down in the hangar alongside the Triton submarine.

With our two tons of gear and supplies loaded on the plane we are wheels-up at 12:26 p.m. January 14, leaving the last bit of civilization in South America. At the end of the two-and-a-half-hour flight, we land at Base Frei, a Chilean research station and the only landing strip on King George Island. The primitive airstrip is only cleared of snow during the brief Antarctic summer. As our pilot executes a steep left-hand approach, I pick out SuRi anchored just offshore in Maxwell Bay.

Baggage claim Antarctica style means a blue plastic tarp is laid on the ground under the wing to keep the baggage and cargo out of the rain and mud. After sorting through the pile for my personal gear, I jump into the left front pilot seat of the AStar, greeted by SuRi pilot Steve Zito. We take the two-minute hop out to SuRi while the bulk of the cargo is loaded onto the tracked vehicles and transported down to the landing craft waiting on the shoreline. In her long inventory of small boats, SuRi carries a 28-foot aluminum landing craft. A large-capacity wide-beam workhorse, the sturdy boat nudges up to the shore and drops its forward gate for easy on-off access. SuRi’s owner has found it to be the perfect tender for putting guests and gear ashore on tropical beaches, and it would prove to be the perfect vessel for dropping our bundled-up band of would-be explorers on the rocky, icy shores of the Antarctic Peninsula.

All aboard SuRi and settled in luxurious quarters, owners and guests meet in the salon for a welcome toast followed by the first of many magnificent dinner creations by Chef Shaun Williams. From King George Island, we would steam all night, crossing the Bransfield Strait to the Gerlache Strait and Enterprise Island in Wilhelmina Bay, some 155 nautical miles farther south.

Late morning, SuRi drops anchor off Enterprise Island. We bundle up and load into three heavy-duty Zodiacs heading to a cove that had been a haven for whalers to hunker down during bad weather. In 1916, the Norwegian whaling supply ship Gouvernoren caught fire and was intentionally run ashore to save the crew. The rusted hulk still rises high above the surface of the sea providing a good home for a variety of sea birds.

5 tips on how to tackle ice with an explorer yacht