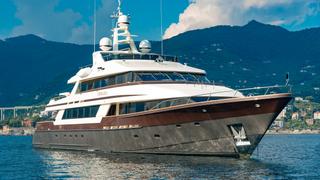 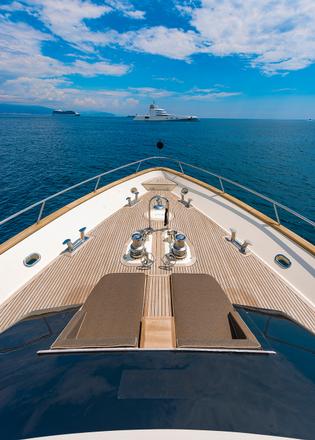 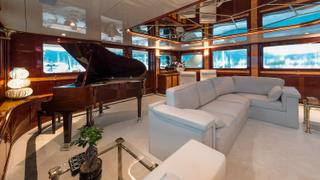 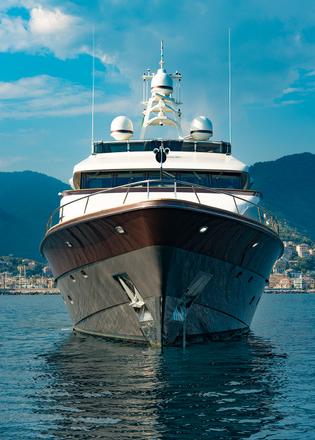 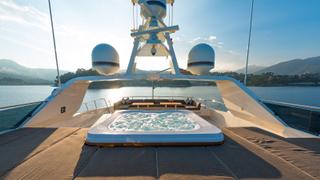 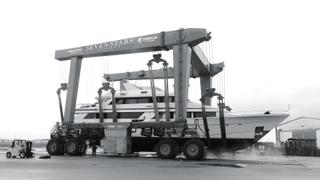 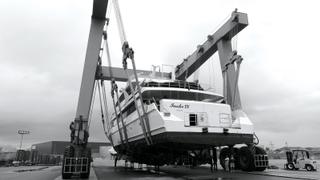 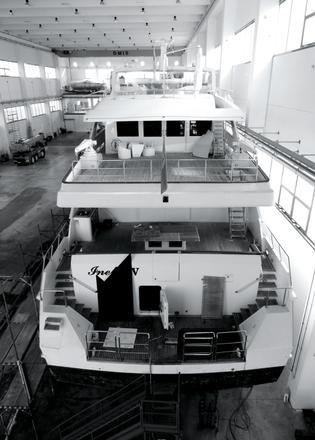 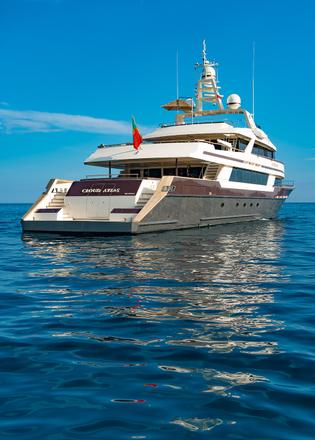 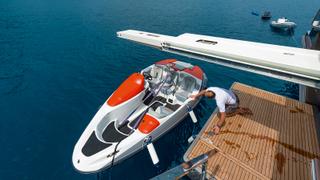 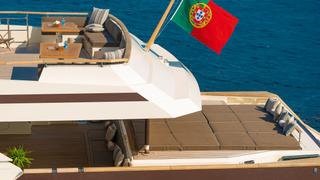 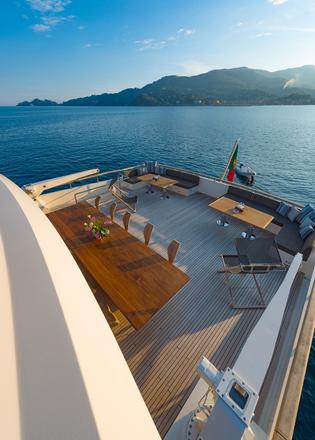 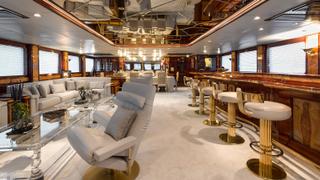 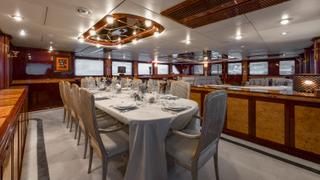 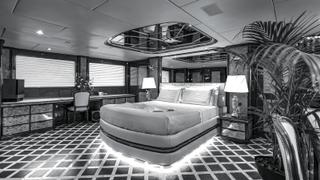 The inside story of Cloud Atlas' refit and extension

I don’t think Luca Pedol was any more impressed by the torrential downpours in Genoa than I was. After all, Nauta’s refit job on Cloud Atlas, which we were meeting to look over, was largely focused on exterior spaces — best admired under a vivid blue sky. Thanks to the company’s design skills, the boat managed to shine, even under an extra large umbrella.

Thunderstorms aside, I knew to expect good things. Italian designers Nauta (with Luca’s uncle Mario at the helm) famously brought us Azzam, the world’s largest superyacht at 180 metres. I was curious to find out how that same magic touch would be applied to the refit of a relatively modest 40 metre.

“Cloud Atlas [originally Ineke IV] was built in aluminium in 1990 by Lloyds Ships in Australia,” explains Luca, as we take shelter in the spacious main saloon. “The owner bought her in 2014 but, after his first cruise in the Med, he found there were some functional and aesthetic issues. He came to us because he wanted to solve those problems instead of abandoning the boat.”

Indeed, the yacht had some rare qualities. “The reliability, safety, skilled construction and powerful seaworthiness of this yacht immediately attracted me,” says the owner, “together with the width of the full beam main deck, which is uncommon on that size of yacht.”

At the ripe old age of 27, many of the yacht’s main issues — stability, noise, lack of outdoor space — were age-related. “In the 1980s people lived their lives at sea in an entirely different way than they would today, and the yachts from that period reflect that,” says Mario Pedol.

“Most of the social spaces were concentrated inside and the owner found this to be a real weak point. Also, from the aft VIP cabin, you could barely sleep, it was so noisy. And the lack of stabilisers made it really uncomfortable, both while cruising and at anchor.”

Cloud Atlas was known as Ineke IV before her 2015 refit

Nauta, together with the young and talented naval architect Francesco Rogantin, set about fixing things up and the decision to extend and adjust the stern trim was given the green light.

“The owner wanted to maximise the extension and adjust the stern trim to improve hull efficiency,” says Rogantin. “On top of the noise, vibration and stability problems, it was also important to reduce noise from water splashing under the aft platform. This called for extensive hydrodynamic improvements and all new appendages.”

Rogantin proposed a hull shape with a “step” on the transom to fix the sloshing problem. But the propulsion and steering systems also needed serious attention: the shaft lines were lengthened by about 3.7 metres, with new intermediate shafts and new V-brackets.

Larger rudders were installed in an optimal position to improve manoeuvrability. The skeg was redesigned to protect the propellers and provide directional stability. A couple of zero speed stabiliser fins and a new bow thruster were also installed.

The works were entrusted to Seven Stars Marina & Shipyard in Viareggio. It cut a portion of the stern by three metres, replacing it with a nine metre section, built to Nauta’s design. “Francesco spent a long time performing some CFD [computational fluid dynamics] to ensure we had the best solution for every single change,” says Luca.

The plan required particular expertise from the yard too. “When elongation concerns aluminium the difficulty increases because, unlike steel, it accumulates tensions over the years and needs special attention to reinforcements near the cuts to maintain the correct lines,” says Davide Mugnaini, CEO of Seven Stars.

The resulting six metre extension gave a massive boost to the main and upper decks — and, as planned, achieved a much leaner profile in the process, also aided by a new exterior paint job. “The darker coloured hull against the white superstructure really highlights the new lines,” says Luca. “That was the owner’s idea.”

But the improved aesthetics are only part of the picture. After the refit, which also included extensive hydrodynamic improvements, this 46 metre yacht is two knots faster, much quieter, more stable and more fuel efficient.

The boat’s enthusiastic captain, who shows us around, has witnessed the benefits of the extra space first hand. “People absolutely love spending time on the main deck now. They’ll be over there all day lounging across the sunbeds,” says Luca, gesturing outside.

For him, the appeal of the extended main deck and new superyacht beach club lies in its direct access to the sea. “When you cruise in a 50 foot [15 metre] sailing yacht,” he says, “you are really close to the water, you can touch it easily. That contact is there. On these bigger yachts, though, that link to the water can be harder to find. Now, you can have cocktails there with your feet in the ocean.”

The captain agrees. “Usually an onboard whirlpool is used all the time,” he says, referring to the boat’s existing sundeck, which features a superyacht spa pool, “but this solution is much more popular. You can just jump straight into the sea.”

The upper deck aft previously stored the tender and little else, but now, three metres longer, it offers another roomy social area instead. Accordingly, there’s a huge outdoor dining table and two L-shaped chill-out areas, although two bulky cranes remain either side.

“We initially suggested removing them and they were the subject of lengthy discussions, but the owner finally decided to keep them because they can still come in handy,” says Luca. The captain confirms that the cranes were used recently to lift a treadmill on board for charter guests.

The extra space has also made way for a bigger, side-opening tender garage — something that has proved particularly useful for this owner. Beyond the 6.5 metre Castoldi tender, there’s a three man Jet Ski and all manner of toys.

The captain gestures to an empty space. “This is where the owner’s dirt bike usually sits,” he says. This Italian owner has a thing for dirt biking, and he’ll often take his wheels out for an exploratory spin on arrival at a new marina. It was important that the new design allowed for a sporty and social lifestyle: this is a boat on which guests will do more than simply lounge about.

That explains the nightclub-worthy sound system that the captain signals to on Cloud Atlas's main deck — and the piano upstairs. I’m not surprised to find out that one of the boat’s original features, a six-seat bar in the main saloon inlaid with Australian crocodile skin, was a big selling point for the owner.

Mario agrees. “We were really working in tandem with the owner on this project. He gave us ideas and innovative input on ways to update the yacht’s look while staying in harmony with its original style, which none of us wanted to change.”

Luca predicts a much longer process for the interiors refresh on Cloud Atlas. “Sometimes when you live on board you start appreciating the concept and the atmosphere.” Later, as he points out some of his favourite original features — the ergonomic door handles, the oversized light switches, even the mirrored ceilings, which help to reflect the natural light — I start to understand why the owner might not be in a rush to change things.

“Some of these old yachts have a certain soul that you don’t get in modern yachts,” says Luca, reading my mind. The captain agrees. “This yacht has what we call ‘marino’ style — a nautical, sea style. Boats now are often designed to look like houses instead.”

The owner, who emails me post-meeting, is of a similar mind. He would like to update the interiors, he says, but he is keen not to sacrifice original elements (he references the hand-painted Sherle Wagner washbasins in the bathrooms) just for the sake of it.

We gather in one of the five guest cabins, examining every nook. “I think the interior layout of the boat works really well,” says Luca. “This space I particularly like,” he adds, as we move into the owner’s cabin. “On a modern yacht, you’ll often have a full beam cabin but, while it’s wide, it’s also short, like a bad hotel. On here, there is a lot of space all around the bed.”

The owner also tells me by email that the generous volumes were something that attracted him to the yacht in the first place. In the owner’s suite alone, there’s room for a his and hers bathroom, two walk-in wardrobes — and a lot more besides. The other social spaces, even pre-refit, are remarkably large.

Of course, working with an old yacht isn’t all smooth sailing and, given that Lloyds Ships no longer exists, those disadvantages were magnified. “It was a huge problem as there were only printed paper drawings,” says Luca, waving said papers. “We had to scan and redesign every single line. It’s not the first time we’ve faced the issue; every time we redesign a yacht that was built before digital files, it happens.”

But as Luca says: “Each time you try a new solution you take a risk. As owners and designers become less conservative, they try new solutions. That’s how the industry moves forward.”

Nauta has certainly helped to move this particular yacht forward. “The end result is a new Cloud Atlas that is still in sync with the old, but looks, and actually is, a largely different and up-to-date yacht,” Mario says. I only hope that the next time we meet, it’s somewhere sunny.