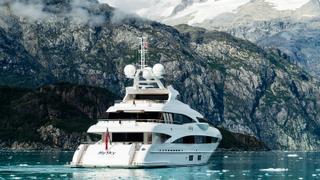 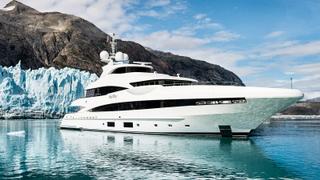 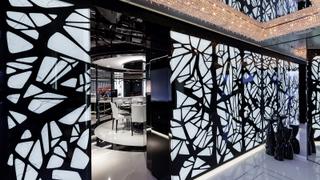 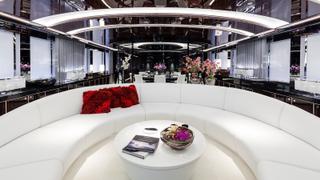 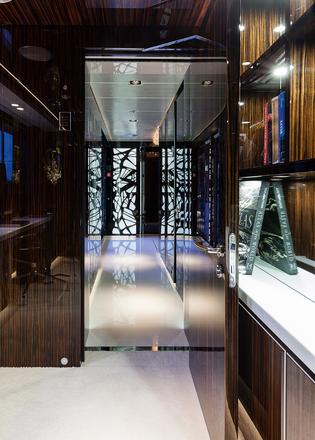 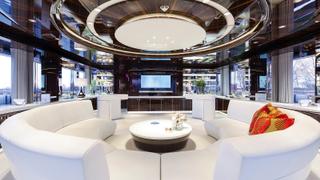 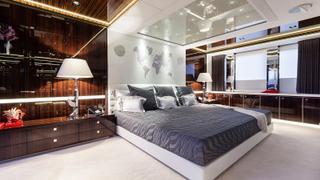 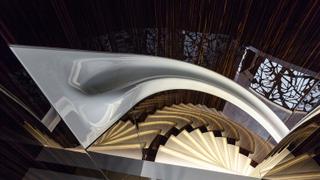 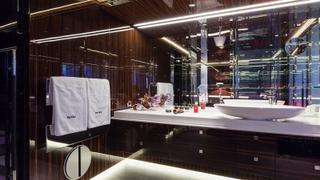 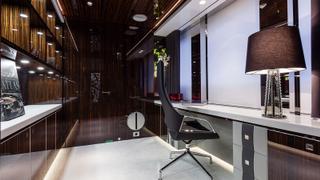 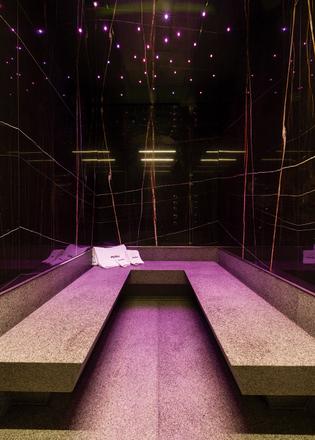 This time it's personal: Inside the design journey of 51.1 metre Heesen MySky

MySky may be the owner’s third Heesen, but it’s the first that he’s really been able to shape to his taste, as Risa Merl discovers...

At the same time that Dutch architect Erick van Egeraat was designing the interior for the custom 51.1 metre Heesen yacht MySky, he was also creating a glass-filled 24,000 square metre church and auditorium at the University of Leipzig in eastern Germany. The two projects, seemingly, could not be more different. But van Egeraat, whose portfolio ranges from private homes to football stadiums, will tell you there is one common thread: precision in engineering. It’s a well-honed skill that served van Egeraat well in what was his first superyacht project.

MySky was delivered in 2014 and used privately until earlier this year, not even making a splash at a boat show. Only a few photos were released, of a futuristic-looking bar backed by a glowing LED picture wall, leaving the boat world eagerly wondering what the rest of the interior could possibly look like. One group was invited on board, however: the esteemed judges of the World Superyacht Awards. They had a chance to witness van Egeraat’s work first hand, as well as the yacht’s personalised layout, which helped her scoop a World Superyacht Award in 2015. The owner has used her liberally since then, travelling throughout the Caribbean and up to Alaska. Now he has made her available to charter – and the rest of us finally get a chance to look inside.

This is the owner’s third Heesen, after 37.3 metre Ilona (now Her Destiny) and 49.8 metre Sky. When the commissioning client pulled out of the project for a custom 51 metre from the Dutch yard, the owner of Sky swooped in, taking advantage of the opportunity to buy a newer, nearly finished yacht. The project was still in an early outfitting phase, and the interior hadn’t yet been installed, which eased things considerably, though designing a new interior delayed delivery by nearly five months.

His previous yacht, the 2010 launch Sky, had also been purchased near completion, but even closer to delivery and with the interior finished. This time around, he wanted to put his stamp on the layout and interior and called in van Egeraat, who had worked on many of his residential and commercial projects.

“He said: ‘I want something modern, but comfortable.’ I knew what he meant – but isn’t it strange that for many people modern isn’t comfortable?” says van Egeraat. “Second, he is very sporty, and had very specific ideas about the gym. This is a person who really uses the yacht quite intensely – not to show off, but for his own personal enjoyment.”

The main deck lobby features a touch of glamour emanating from the crystal chandelier, framing a polished stainless steel “mirror” – one of MySky’s signature features

Sky’s interior, also by a land-based architect, was too modern for his client’s liking, says van Egeraat. “It was a real architect’s yacht – a lot of glass, sharp angles and quite cold.” MySky might seem similarly cool at first glance, with her use of black, white and silver – a theme established in the saloon. But the space is warmed by the glow of rich, high-gloss Macassar wood. A semi-circular white sofa is at the centre of the space, with a dining table forward flanked by a birdcage-like enclosure of high-gloss black joinery. Eyes are immediately drawn to the patterned, tiered ceiling, alternating between layers of Macassar and backlit white panels. The designer opted for this over a white leather ceiling to add character.

“The interior is very different,” says Peter van der Zanden, Heesen’s general manager of design and development. “You can see it’s a land-based architect because of the different way he uses materials.”

Though stainless steel and Macassar are not new to yacht design, it’s the application and sheer volume of these materials that sets MySky apart. Not to mention the white Thassos marble. “He chose really heavy materials, creating more of an industrial look.”

But spend a few moments sitting in the saloon, and the comfort quickly becomes evident. The pure white leather sofa, with its curved back, is deliciously soft, both to the touch and to sit on. A Bang & Olufsen television emerges from its hiding place at floor level, and we are enveloped in an immersive audiovisual experience.

“The owner is a big fan of TV and music, so TVs are found throughout,” explains second engineer Eddie Epps. Another television faces the dining room, allowing the space to be transformed into a conference room. Most guests will receive a different sort of high-tech greeting, entering from the aft main deck to enjoy a welcome drink at the bar with its impressive LED wall. This can display atmospheric images, live-stream video footage and play photos or videos from that day’s adventures.

The formal entry in the main foyer is a stunning space topped by a rectangular, crystal chandelier framing a mirror. Reflective surfaces are used in abundance to create an illusion of spaciousness, and anything that looks like a mirror, like those found overhead in the foyer or above the bed in the master, is really polished stainless steel, chosen for the truer reflection it gives. “With stainless, every small dent appears, so one of the challenges was to use real steel and not use plating or laminate and still have absolute perfection,” says the designer. “Heesen did a remarkable job – I’ve never seen such quality.”

The main staircase is something to behold – curving Macassar with white steps glowing from within, and a sinuously carved handrail, built directly into the wall. “We had made a full mock-up [of the stairwell] to make it work,” says van der Zanden. The lacquered white handrail fits the hand perfectly, guiding you down or up the stairs.

Every furnishing and fixture is designed to not just look good, but also feel good. “You should never try to follow a shape for the sake of that shape,” says van Egeraat. “If I find that a table doesn’t feel good when I sit there, then I change it. I’m not hung up on a certain proportion or aesthetic detail.” What consumes van Egeraat is ergonomic design. He praises the iPhone, and relates it back to choices he’s made, such as the tailor-made curved doorknobs. “Like an iPhone, you want it to feel good in your hand, but it’s also so if you rush past the door when it’s open, your jacket won’t get caught.”

Consistency from one room to the next was favoured over a lengthy list of materials. Van Egeraat says it was a challenge to get Macassar that would feel as if it came from the same tree, and it required orders from several countries. Everything white on board had to be pure. If a black stain was found in the marble, it was sent back. The furniture, lighting and wool carpets in the cabins – hand-dyed in a custom colour – were chosen to match this marble.

“Nothing was white enough,” jokes van der Zanden, “and everything had to be the same shade of white. [Van Egeraat] even wanted the smoke detectors to be white, which we could not do, of course, because of class requirements.” Van der Zanden says the key is communication. “If you’re used to the yachting industry, you know what’s possible and what’s not possible – and you know you can do things slightly different but similar, like honeycomb-backed marble. With this designer, we had to convince them.”

One obvious difference between designing a yacht and a land-based project is the size constraints. “It might sound pompous, but when it comes to space planning, a yacht is not that difficult because there aren’t unlimited possibilities – naval design dictates certain placements,” van Egeraat says. Despite this, he did push boundaries in the GA. The main deck is atypical, with a separate bar area opening into the main saloon, and forward the master is combined with a spa area. A glass wall, which turns opaque at the touch of a button, separates the bedroom and bathroom. The bathroom itself has an enormous steam room, much like you’d find in a beach club spa. “The marble in all the en suites is over 300 million years old,” says Epps. “In some places you can see fossils. This is solid marble; about 20 tonnes of extra weight went into the sub floors to hold it all up.”

The master is a bastion of privacy for the owner, with a fixed balcony, similar to that seen on the new Heesen Irisha, that can be used without having to disturb crew or can simply be opened to enjoy a fresh breeze. The headboard is an intricate map in leather, a detail used in the deckheads of the double-berth guest cabins, while the twins have polished stainless steel overheads. The map ceiling is well thought out, with barely perceptible “creases” designed to allow easy access into the ceiling if needed.

Another layout shake-up was the upper deck gym. The sundeck is technically three areas devoted to wellness and relaxation: a sunpad-laden lounge forward; the gym to centre taking in the best views while you work out; and a private enclave aft with a spa tub, bar and built-in misting system to keep things cool. The deckheads are intentionally higher in the gym to allow guests to use the treadmill with ease.

The bathroom itself has an enormous steam room, much like you’d find in a beach club spa

Though MySky is famed for her interiors, the exterior spaces are also commendable. The foredeck was designed for a touch-and-go helipad, something the owner no longer uses. But setting aside that much space has created a large forward lounge, with a sunpad at the front, set on top of a box that hides the rescue tender. It’s a lookout point used even while under way in calmer weather, while pulling into Portofino or whale watching in Alaska to the soundtrack from the CAT audio system.

The upper saloon is an enlarged version of the main saloon, with a C-shaped sofa that moves on silver tracks embedded in the white carpet. The couches can swivel 180 degrees, allowing guests to enjoy the views outside or inwards in cinema mode. Another Bang & Olufsen television is found in the ceiling above the upper aft deck dining table. While many exterior sets are hidden, this screen faces down so that images of a starry sky might be shown, and then it can unfold for normal viewing. The boat is specced exclusively with the Danish audio brand, despite the weight considerations. “There’s no [audiovisual] product heavier,” van Egeraat says, adding that he designed his own custom system for controlling everything from the audiovisual to the lighting – something he does for all his residential clients.

Though van Egeraat is used to working on projects of a grander scale, he says he never felt limited or bored by a 51 metre motor yacht. “The real challenge was to provide the level of comfort my client was used to – what he’d have in a large villa,” he says. “A modern yacht owner really lives on a ship… in the past maybe they spent a week, but nowadays they spend weeks in a row. And this one is designed to be away from the rest of the world. If you can provide the maximum level of comfort and livability, then that is luxury.