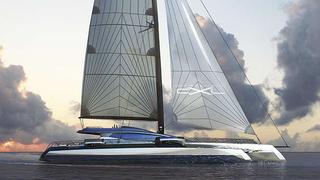 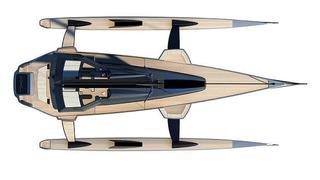 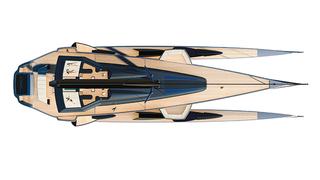 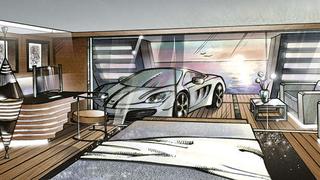 The genesis of the UltraLuxum CXL160 trimaran – involving a prince, a flying boat and a watchmaker – has something of the fairytale about it. But Jean-Francois Ruchonnet, founding partner of the UltraLuxum Group and a former chief of horology at Chopard, has worked to make the design a viable reality.

‘I had a beautiful house on Lake Geneva with a water view, and in 2006 I saw _Alinghi 5 _being transported by helicopter,’ says Ruchonnet of the 27m sloop-rigged catamaran built by Ernesto Bertarelli for the 33rd America’s Cup. ‘I thought, “My God, this is amazing. One day I too would like to create a beautiful yacht.”’

Indeed, after 27 years of creating fine watches, fifth-generation watchmaker Ruchonnet left to design his multi-hull. His chutzpah received a royal seal of approval.

‘I met Prince Albert in Monaco three years ago,’ recalls Ruchonnet. ‘He said this was a very interesting project and that if I wanted to come to Monaco I would be welcome. So I decided to go to there to create a company, UltraLuxum, to develop the design.’

The concept – still at the design stage and awaiting a client – connects the luxury yachting scene so vital to the culture of Monaco and the exhilarating sailing that inspired Ruchonnet on Lake Geneva.

The composite sloop-rigged trimaran will feature a 55m mast with about 1,200 square metres of sail area, and is estimated to reach 25 knots under sail. It will have a master cabin and either four guest cabins, or three guest cabins and a spa. A contemporary interior scheme was penned by naval architect and designer Jean-Jacques Coste, with the support of UltraLuxum’s Jessica Sbaraglia. If built, it will be the largest cruising trimaran in the world.

But the design’s most exciting feature is its folding hull beams, which reduce the boat’s width from 23m, in sailing configuration, to 11m in harbour configuration. These enable stability at sea and make access to crowded marinas easier.

Ruchonnet invited multihull specialist Coste to be his partner and he has been invaluable in giving the concept a solid technical foundation.

‘We are working on a system for the moving hull beams that is as simple as possible,’ says Coste. ‘We cannot talk much about it, because it will be patented. But we can say that the outriggers rotate forward.’

This is not the only development since we first reported the UltraLuxum on our website last year. The flybridge has been widened, the mast bulkhead moved back a metre to increase space, and the floors lowered to improve headroom and visibility.

For all these models, only sustainable wood approved by Prince Albert’s Wood Forever programme will be used in veneers, teak decking and so on. There is also an emphasis on environmentally friendly power.

‘We are working on diesel electric propulsion,’ says Coste, ‘and it could give us hours of silent running with no generators, as we are working with a lithium-ion battery manufacturer, [so] we can also save a lot of energy.’

The modern, innovative attitudes of the designers have led to interest being expressed through the UltraLuxum’s broker Bluewater.

‘New internet billionaires are appearing,’ says Coste. ‘They don’t come from the culture of the classic motor yacht; they want a new boat with the ‘wow’ factor. They are open to this kind of concept and we are discussing the idea of a version of this boat with a prospective client.’

So, like one of Ruchonnet’s cleverly designed watches, it looks as though this yacht just might make the transition from dream to reality.