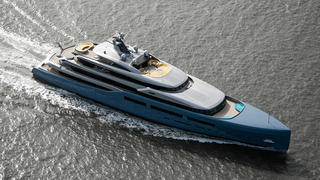 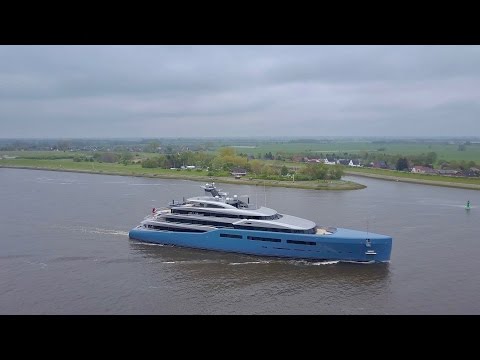 The 98 metre Abeking & Rasmussen flagship yacht Aviva has been delivered. AIS data shows the yacht arrived into the British port of Falmouth earlier today (May 8) after leaving Lemwerder over the weekend.

Previously known as Hull 6501, this four-deck displacement yacht was launched in January sporting exterior styling by Reymond Langton Design. This is the largest project that the studio has worked on to date, surpassing the 91 metre Lürssen yacht Lady Lara.

Very few details are known about Aviva so far, although her steel hull is believed to support an aluminium superstructure and she was built to Lloyd’s Registry standards.

As this image shows, her curvy superstructure sports large expanses of glass hinting at a bright interior, while the hull has been finished in a vibrant blue tone. Other key features include a vertical prow and a number of cut-out sections aft, suggesting that the yard has fitted either a side-loading tender garage or a fold-out superyacht beach club. A notoriously secretive yard, Abeking & Rasmussen has not confirmed any of these details as yet.

Other projects currently under development at the German yard include the 80 metre Abeking & Rasmussen 6502, which is due to launch next year, as well as two further yachts around the 70 metre mark.