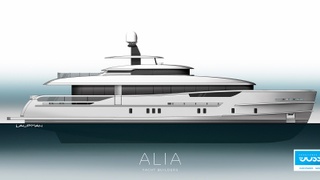 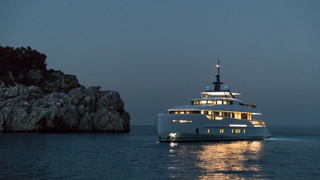 Turkish yard Alia Yachts is building on the success of its 30.5 metre superyacht Virgen del Mar VI with a 32.4 metre sistership.

Named Nozomi II, the 32.4 metre yacht is being built on spec and due for delivery in 2021. Alia Yachts chief executive Gökhan Çelik described Nozomi II as "an evolution of the same concept" of Virgen del Mar VI.

Nozomi II will have a number of differences however. The yacht will be two metres longer than Virgen del Mar VI, with a higher gross tonnage of 240GT against Virgen del Mar VI’s 235GT. This will result in a larger galley, more wardrobe space in the guest cabins, as well as a dedicated laundry room in the garage, the yard said.

Speaking about the delivery of Virgen del Mar VI last year, Çelik said: “I said at the time that there was nothing quite like Virgen del Mar VI on the water. That’s still true, at least until the launch of Nozomi II, which is very much an evolution of the same concept but with some significant upgrades.”

Exterior styling has been undertaken by Frank Laupman’s Omega Architects and has been described as “virtually identical” to Virgen del Mar VI. The superstructure however has been “subtly restyled” by Van Oossanen Naval Architects to feature a “moderately flared bow.” Çelik said this would result in a “drier ride underway.”

Nozomi II’s propulsion package will consist of two CAT 760hp engines for a top speed of 14 knots and a range of almost 3,000 nautical miles.

The layout remains largely unchanged from Virgen del Mar VI and includes accommodation for 10 guests. This includes a full-beam, main deck master stateroom with a private terrace forward. The rest of the guest accommodation, comprising two doubles and two singles, will sit on the lower deck.

Alia Yachts has not reappointed RWD, which designed the interior of Virgen del Mar VI, to pen the interiors but is allowing the prospective owner to choose their own designer instead.