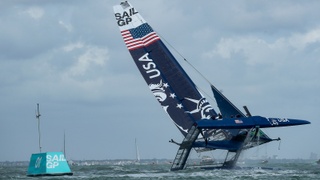 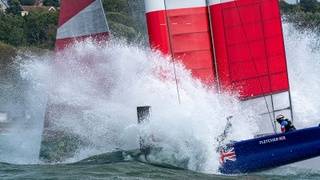 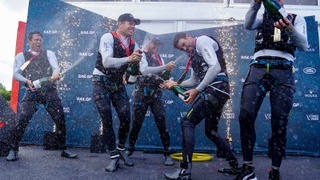 Australia has become the first sail racing crew to break the 50 knot speed barrier during the fourth leg of the international sailing league SailGP.

The fourth event of the international competition took place on Saturday, August 10 and saw five crews representing Australia, France, Great Britain, the United States, China and Japan go head to head off the coast of Cowes.

The dramatic race saw the Australian SailGP team dominate the field from the starting line and break the 50 knot speed barrier as they cruised over the finish line of the first race.

The US SailGP team meanwhile capsized just 30 seconds into the first race but was able to complete the rest of the day’s racing thanks to quick assistance from the SailGP tech team. The team staged an impressive comeback, finishing in third place on the overall leaderboard.

The Great Britain SailGP team weren’t so lucky. On the penultimate leg of the first race, the Dylan Fletcher-led team suffered a violent nose dive, resulting in damage that prevented them from finishing the racing.

“We were sat there before the start of the racing watching the floods of crowd come in, it was amazing to see all that support and we were really looking forward to going racing,” said Fletcher.

“Then, when we went bow down and that was us, game over for the day. We are so disappointed for ourselves but also the fans that came out to support us.”

Australia, led by Tom Slingsby, dominated the day’s competition, winning all three races. The team finished top of the overall leader board with 30 points, while Japan, with 25 points, sit in second and China, with 24 points, is in third place.

“It was hairy out there. It might have looked easy, but it definitely wasn’t. We just did our best and concentrated on ourselves. We heard other teams were having issues and it could have so easily happened to us,” said Slingsby

The final leg of the competition will take place in Marseille next month, with three days of racing planned culminating in an ultimate winner-takes-all match for the SailGP championship trophy and $1 million prize money.