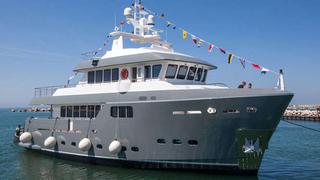 The contract for the new 26.1m Darwin 86 yacht was signed in June 2013. The steel-and-aluminium Darwin 86 series is designed and engineered by Sergio Cutolo of Hydro Tec. Built for long range cruising and ocean voyages, the yacht features extra-thick steel plates, independent rudders and commercial-grade water treatment systems as standard. Each of the yachts in the series, such as hull No 1 Vitadimare 3 and superyacht Percheron, have the same ocean-going capabilities, yet stand apart with customised interiors and technical specifications.

The interior of the new Darwin 86 Gra Nil has been designed around the owner's collection of contemporary art. Interior styling comes from architect Pierluigi Floris, who styled the first two 86s. The interior is modern, featuring freestanding furnishings, and is adorned in materials ranging from beige to grey to complement to the yacht's gunmetal-grey hull paint. Her owner's brief included a dehumidifier system and a high-tech security system.

Gra Nil is the third Darwin 86 to be launched by the yard and it's fifth launch in total. The yard also created the one-off custom 25m, superyacht Furst, delivered in August 2012, and its Darwin 96, explorer yacht Stella di Mare, was launched by Cantiere delle Marche in March 2013.

Vasco Buonpensiere, Cantiere delle Marche shareholder and sales director says, 'This is a very important year for CdM. This is the fifth delivery from the beginning and comes after two signed contracts, so this is a wonderful way to celebrate CdM success and dynamism.'

CdM received an order for the fourth 26.1m Darwin 86 in March of this year, which will stand out from her predecessors as the second generation of the series, offering updated exterior lines. The next deliveries for this year 2014 are the Nauta Air 86, designed by Mario Pedol and Massimo Gino of Nauta Yacht Design, due in mid June, and the Nauta Air 90 due this August.