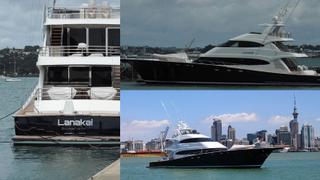 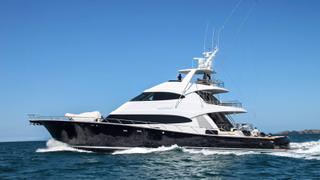 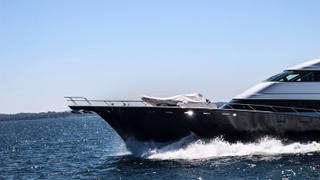 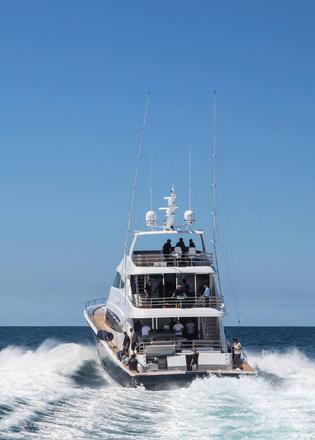 The 39.5 metre maxi sportfish yacht YD1015 has been spotted in Auckland bearing the name Lanakai after her late December handover. This fast planing tri-deck yacht was launched by Yachting Developments on November 23 and is widely recognised as the largest all-carbon sportfish yacht in the world.

Speaking last month Ian Cook, managing director of Yachting Developments, said: "Her sheer scale alone makes her worthy of note, but as a project of passion she is something special. The yard team and I are proud to have been given the opportunity to work on this impressive vessel that is sure to turn heads wherever she goes.”

The carbon hull and superstructure should make for a faster, lighter and more competitive sportfish yacht. Michael Peters Yacht Design (MPYD) is responsible for both the naval architecture and the exterior design, and project management was handled by Australian firm Motor Yacht Build.

Chris Critchett of MPYD added: "As a fishing and diving platform the vessel is truly enormous, and the substantial scale also allowed for commercial-grade power and systems along with the latest in gyro stabilisation to ensure comfort and performance for many years to come.”

The interior design for this 267GT sportfish yacht was developed by Naylor Booth Associates, who worked in close collaboration with the owner's team and the in-house designers at Yachting Developments. The resulting décor is described as "contemporary classic".

Accommodation for up to ten guests is split between four lower deck staterooms, including an amidships master suite, a VIP, a double cabin and a twin cabin with Pullman berths. Meanwhile, the crew quarters allow for a staff of up to six people.

Key features include a lower deck games room, foredeck tender storage for a pair of Smuggler Stratas, an upper deck helm station and an extended aft cockpit that will be left bare to make it easier to reel in the catch of the day. Moving forward, al fresco dining is provided on the main deck with seating for ten around a central table.

Power comes from a pair of 3,100hp MTU diesel engines drawing on a total fuel reserve of 40,000 litres, while VEEM gyro stabilisers should ensure a smooth cruising experience out on the open water.