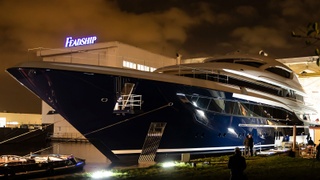 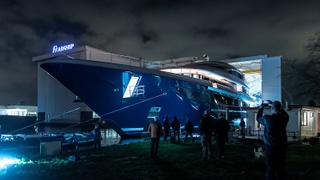 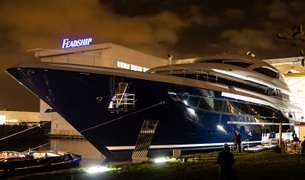 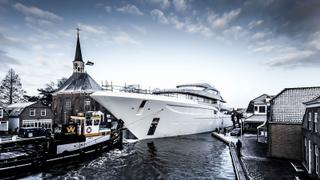 The 72.85 metre Feadship superyacht known as Project 705 has been captured leaving the construction hall at Aalsmeer.

The full displacement yacht, which was designed by RWD with Feadship De Voogt Naval Architects, left the shed yesterday, February 19.

Commissioned by a repeat client, the yacht features a striking dark blue hull, white superstructure and extensive glass glazing that runs flush to the exterior.

Details still remain sparse but the yard promised to reveal more details in the coming weeks when the yacht is scheduled to officially launch.

Project manager Gerhard Dekker said: “It may be a cliché but I truly believe that it takes a team to build a dream, and the way in which everyone has played their part in creating this exceptional vessel is a textbook example of teamwork.”

It comes after the completed hull and superstructure of the superyacht arrived at the yard to begin outfitting earlier this month.

The steel hull and aluminium superstructure of the yacht were previously built by Feadship’s Papendrecht based sub-contractor Scheepswerf Slob.

Little else is known about the yacht, which has a beam of 12.6 metres, has three teak decks and is due for delivery later this year.