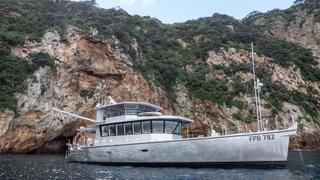 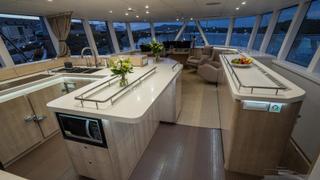 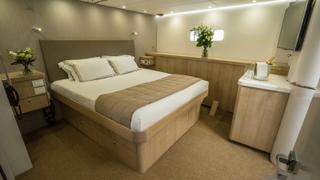 New Zealand yard Circa Marine has delivered Grey Wolf II, the second hull in its FPB 78 series of compact explorer yachts, to a repeat British client.

Sold by Berthon in February 2014, this 26.27 metre Steve Dashew-designed yacht boasts a globe-trotting range of 7,100 nautical miles when cruising at 10 knots, drawing on a total fuel capacity of 18,350 litres.

Like her sister vessel Cochise, Grey Wolf II is powered by a pair of L1066 Lugger diesel engines (based on the Deere 6068 series block), while the unique upper deck layout is based on the same area on the first FPB 97 yacht, Iceberg.

Inside, the great room also has much in common with the FPB 97, with a central galley and a spacious superyacht wheelhouse area, which can be converted into a saloon.

Tender storage is provided on the aft deck, allowing for even more remote exploration. Accommodation is for up to six guests, split between an owner's cabin in the bow, and two double rooms amidships.

Although she has been designed around an owner-operator, Grey Wolf II does feature a compact crew quarters, allowing for a staff of up to four people when needed.

A supremely capable long-range cruiser, Grey Wolf II was built from an unfaired aluminium hull and superstructure to MCA Category 0, has capsize recovery capacity and includes comprehensive solar systems. Her unique hull form also means that she is able to dry out at low tide.

Other superyacht projects currently under development at the New Zealand yacht include the third hull in the FPB 78 series, which is due to hit the water before the end of the year.