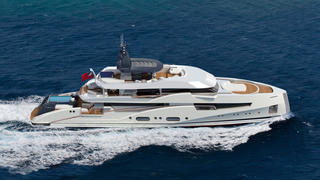 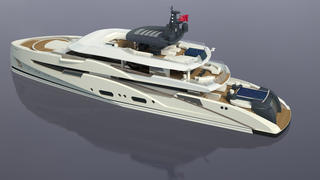 On board accommodation is for ten guests, including a main deck master cabin that makes good use of Project Lay’s nine metre beam and features a private office. All four guest cabins are situated below decks.

The saloon features sliding glass doors, which open this space up to the aft deck and its Jacuzzi pool. Other exterior relaxation spaces include the spacious sundeck, which includes a second spa pool, and the superyacht beach club with integrated spa situated aft of the transverse tender garage.

The foredeck area features large sunpads and a storage locker that would house various water toys. It can also be set up as a touch-and-go superyacht helipad that is large enough to land a Volocopter VC200.

Project Lay has been designed around a hybrid propulsion system, which would feature a silent cruising mode, but the top speed has yet to be revealed. The total interior volume of this superyacht concept is 495 gross tonnes and Fatih Dalkiran would provide technical project management.

Other projects currently under development at the yard include the 80 metre Bilgin 263, which will be the largest yacht launched in Turkey when it hits the water in 2019. A second hull is also under development, ahead of a slated 2020 launch.