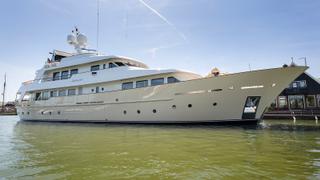 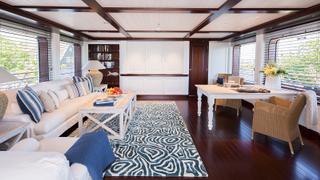 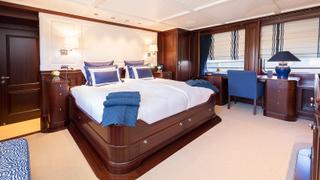 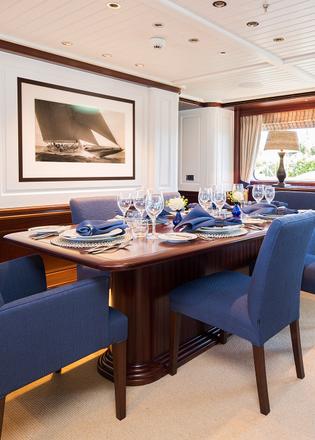 The 38.25 metre superyacht Soprano has been delivered to her first-time owner by Dutch yard Hakvoort, it has been confirmed.

Her hull colour has been described as ‘moondust’ and the classic styling is reinforced by her exterior lines and matching interior. In a statement, the naval architect said, “With her canoe stern and bold lines, this new vessel has a classic look with a modern touch.”

Meanwhile, the yard explained that the owner fell in love with the classic canoe-stern design having seen previous Hakvoort yachts Sagamar and Spada. Director Albert Hakvoort Jr added, "She is a real gentleman’s yacht, blending the timeless beauty of our maritime tradition with lots of modern touches. The quality of the materials — the finest marbles and woods — is as important as the seamless way in which they have been fitted together."

Key features include an airy main deck saloon with lounge seating for ten and large sliding doors that can be opened to allow cooling winds to blow through the yacht. Up on the bridge deck, Soprano boasts an al fresco dining area and a sheltered upper saloon, while the generous superyacht sundeck has been fitted with a Jacuzzi that is surrounded by sunpads.

Take a closer look at the Hakvoort motor yacht Soprano

Accommodation is for ten guests split between four cabins, including an owner’s cabin, a full-beam VIP suite and two double rooms, one of which has been fitted with a pair of pullman berths. Meanwhile, the crew quarters of Soprano are situated in the bow with accommodation for up to six people in three cabins.

“Like myself, the owners prefer unassuming elegance to flashy designs,” interior designer Buytendijk explained. “The same combination of colours and materials is found throughout the interior, in the main stateroom, guest areas and lounges, based on a philosophy that any boat below 60 metres should have a unified style.”

Key materials include mahogany, white lacquer and limestone. The tone on the upper deck is more informal, inspired by New England beach houses, with the design flowing seamlessly between the aft deck and the skylounge.

Power comes from a pair of 600hp Caterpillar C18 engines for a top speed of 13 knots. When trimmed back to 11 knots, Soprano will offer her owner a maximum cruising range of more than 5,000 nautical miles.

Other projects currently under development at the Dutch yard include the 63.33 metre Hakvoort YN249, which is due to launch in 2018.