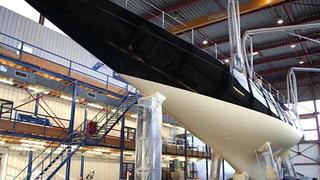 The launch of a new J-class sailing yacht is always an exciting moment and the next one, the 40 metre Rainbow, is scheduled to be launched by Holland Jachtbouw in a couple of weeks.

Begun at Bloemsma Aluminiumbouw in October 2009, the construction of Rainbow‘s hull was completed in July 2010. The project was transported on a barge to Holland Jachtbouw to be fitted out.

The original Rainbow won the America’s Cup in 1934. She was designed by William Starling Burgess, and built by Herreshoff, USA. In 1940, she was sold for scrap. Built in aluminium, the 39.95m Rainbow replica is based on the original design, with a modern update from Dykstra Naval Architects.

Her interior will keep a 1930s decor accommodating 8 guests and 8 crew. Guests will be in three cabins: a master, a double and a twin plus two Pullmans. During the races, the crew will be 25 to 28.

The beautiful black hull of Rainbow is set to be launched mid February, in time to achieve all sea trials before the 2012 J-class regattas. Lloyds registered and MCA compliant, Rainbow will also be available for charter.