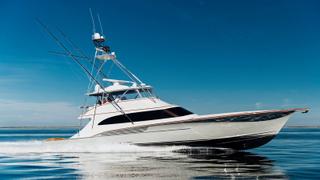 The 27.43 metre sportfish yacht Jaruco has been delivered by Jarrett Bay Boatworks ahead of schedule and is currently on her maiden voyage to Costa Rica.

Hull No 62 for Jarrett Bay Boatworks, she was built for an experienced owner whose brief called for state-of-the-art materials, design and electronics to create the ultimate sportfish yacht.

Jaruco features advanced build techniques, utilising titanium and carbon fibre composites, such as a carbon fibre bridge, cabin, decks and stringer system, as well as a cold-molded wooden hull. Substantial weight has been saved, which will lead to easier handling, fuel efficiency and increased range. Extensive virtual tank testing, actual in-water tank testing and a detailed weight study have been completed to optimise her performance.

Jarrett Bay revealed last year that its new flagship yacht will accommodate up to ten guests in five en-suite staterooms, including a full-beam owner's suite complete with an office — a rarity among sportfish yachts.

Other key features include her cockpit, which has been left open for reeling in the catch of the day, while the flybridge is ideal for spotting potential catches from afar and a hardtop Bimini means that guests relaxing in this area will enjoy plenty of shelter from the sun when needed.

Power comes from a pair of 2,600hp MTU M96L diesel engines, which will draw on a total fuel capacity of 17,700 litres, while her maximum draught of 1.73 metres means she should be able to reach a wide range of fishing hotspots.

Jaruco is the second project over 24 metres to be completed by Jarrett Bay Boatworks in the past two years after the launch of the 26.6 metre Blank Check.