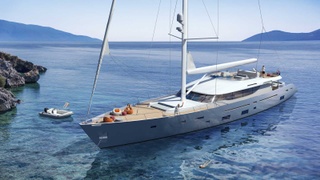 The sailing superyacht is now reaching the end of hull construction. Painting and hardware installation are set to follow.

It comes as the builder announced it had reduced its production activities by 30% as a result of the global coronavirus outbreak.

The flagship project L'Aquila II was signed in May 2019 and sold to repeat client looking to upgrade their current 34 metre sailing yacht, also named L'Aquila. Due for delivery in 2021, L'Aquila II will be the largest sailing yacht built by Mengi Yay, topping the 42 metre Gweilo.

L'Aquila II will feature a steel hull and aluminium superstructure with naval architecture and exterior design by Ginton Naval Architects. Her interiors will be penned by BTA Design.

Accommodation will be for up to 10 guests in five cabins, with a further three cabins sleeping up to six crewmembers.

Power will come from a 911hp Yanmar engine with a maximum speed of 14.6 knots and a cruising speed of 13.5 knots. The sailing yacht will have a beam of nine metres and a four metre draft.

The project follows the launch of Mengi Yay's 44 metre Project Virtus which hit the water at the end of July 2019.