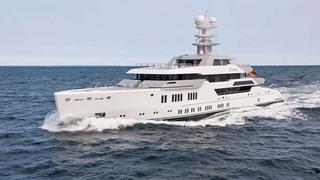 Formerly under the name Project Green, Ester III was launched in May and completed her sea trials in the Baltic Sea under perfect weather conditions in July. Her final delivery is now set for autumn 2014.

With exterior design by Espen Oeino, the luxury yacht has been crafted out of steel and aluminium to Lloyds standards. Her distinctive exterior has been finished with white and grey paint, and features impressive large vertical windows. With a 11.90 metre beam, she boasts a large pool on the spacious main deck and a helicopter pad on the sun deck.

Ester III’s interior was designed by Reymond Langton and is currently being installed. The elaborate interior will also feature joinery work and furniture by Silver Lining.

Other upcoming projects for Lürssen include the 102.6 metre Quantum Blue – recently launched – designed by Tim Heywood and the 94 metre Kismet II (formerly Project Global) which was also designed by Oeino. Lürssen has also announced that its 85 metre superyacht Solandge, launched last year, will be on show at the Monaco Yacht Show in September.