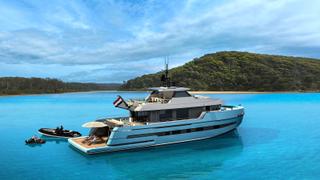 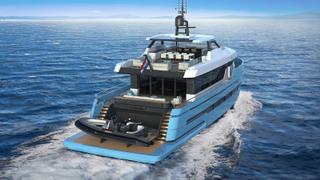 Dutch yard Lynx Yachts has revealed a second model in its Adventure series; the Adventure 29. The 29 metre steel hull and aluminium superstructure superyacht joins the Adventure 32 and features exterior styling by Bernd Weel Design, which has created a “unique, clean and contemporary profile design”, according to the yard.

Lynx also revealed the design brief called for a wide and sturdy yacht and included the words “tough and robust” in capitals. Diana Yacht Design, which was behind the naval architecture, has concentrated on creating a wide beam and shallow draught.

The combined design has resulted in a yacht “designed to go anywhere in any weather”, according to the yard, which emphasised that “even the most remote locations are reachable”.

The yacht features a swim platform which extends to a 30 square metre bathing area once the 6.5 metre tender and water toys have been launched. A crane for launching the tender meanwhile is discreetly stored nearby.

Accommodation meanwhile is for eight guests across a 29 square metre owner’s cabin equipped with a bathroom and walk-in wardrobe, two double guest cabins and one VIP ensuite guest cabin. A lounge area complete with a Jacuzzi sits on the bridge deck while the saloon is on the main deck.

Power will come from a pair of Caterpillar C12.9 850hp engines for a top speed of 13 knots and cruising speed of 11 knots.