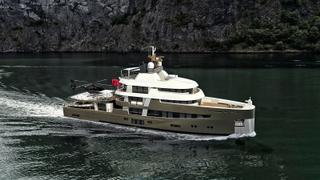 Naval architect and designer Frank Neubelt has partnered with Conrad Shipyard to design a pocket explorer superyacht called The Tug.

The 43 metre design will feature a steel hull and aluminium composite superstructure and features exterior design by Frank Neubelt Yacht Design (FNYD). Naval architecture has been handled by FNYD and German Yacht Couture.

It will be available in three differing designs; the Cruiser, Voyager and Explorer.

The Cruiser will feature an open aft deck to allow for maximum tender storage and enough space to store sailing yachts measuring up to 30 feet.

The Voyager meanwhile is equipped with an additional platform connected to the aft bridge deck, which can be used either as a lounging deck or “party zone”.

The Explorer features the same additional platform as the Voyager, which has been extended to accommodate a helipad. Additional storage space sits beneath the platform to house an array of different toys, tenders and land vehicles.

The Tug features “masculine” exterior design and has been inspired by “the strong appearance of commercial tugs,” Neubelt said.

Accommodation is for 10 and includes a private owner’s deck equipped with access to a private foredeck.

Four additional guest cabins sit on the lower deck, accommodating eight guests. A wheelhouse and interior lounge sit on the bridge deck aft while an exterior helm station is located on the foredeck.

Power will come from a pair of Caterpillar C32 1319hp engines for a transatlantic range at 10 knots and maximum speed of 15 knots.

Neubelt added: “The Tug will definitely break certain misconceptions that I see on the market in regards to how an ocean worthy explorer vessel should be designed for maximum seaworthiness, comfort and most importantly safety in the most demanding weather conditions.”