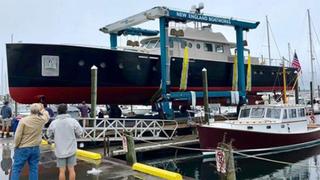 New England Boatworks (NEB) has launched the 28.7 metre all-aluminium motor yacht Contraband. Videos posted online show the yacht, which is the largest vessel ever built by the yard, being launched on August 24 after construction began in July 2017.

The yacht has been built for Newport Shipyard owner Charlie Dana who also owns a 21.3 metre Hood design aluminium ketch called Saint Roque, which was one of the first boats ever built at the yard.

NEB previously said in a statement that the build of Contraband “demonstrates the Dana family’s commitment to the local marine industry.”

Details about Contraband remain sparse, but NEB has previously described her as a “durable, rugged, world cruising vessel” which “takes advantage of NEB’s many years of expertise in aluminium construction.”

She is also said to feature “tugboat engines” and is set up to be handled by a minimal crew. She will have a long-range capacity and a cruising speed of 13 knots.