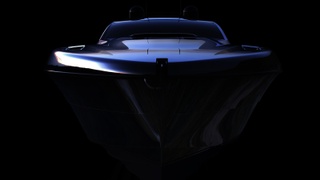 Italian yard Otam has revealed more details and renderings of its new 22.3 metre model, the 70HT.

Described as “seriously sleek”, the Otam 70 HT has been designed by BG Design Firm while engineering has been penned by Umberto Tagliavini in collaboration with Otam chief executive Gianfranco Zanoni.

Highly influenced by luxury automotive and aeronautical design, the model is described as "the epitome of dynamic performance and timeless style”, by the builder.

The automotive design inspiration is evident in the scooped air intakes in the hull, each side of the foredeck sunbed, in front of the windscreen and under the radar arch. All will work to channel air into the engine room.

Speaking about the design, BG Design Firm said: “The design is strongly inspired by the aeronautical world and luxury sports cars. It was essential to design the new 22.3 metre by taking into account the proportions and lines that have always distinguished Otam yachts.”

Otam sales and communication manager Matteo Belardinelli added: “We wanted to take the detailing to a new level on the new 70HT model. Meticulous attention to detail has always been a hallmark of the brand and BG Design Firm interpreted our brief perfectly.”

Customisation of the yacht is key, the builder said, revealing that the owner of the first hull has chosen to include a cockpit and saloon with sofa seating along the port side for entertaining large groups.

Elsewhere, the yacht will include a sunbed on top of the transom tender garage and a sun bed at the bow. Other options are available, the builder said, adding that the second in the series will likely have “a more classic” layout.

The first hull will also feature a three cabin layout, including a full 5.4 metre beam owner’s suite forward with a separate crew cabin at the bow. The interior design options meanwhile are “limitless”.

Power will come from a pair of 2000hp MAN or MTU engines for a top speed of 50 knots. The first 70HT will make its international debut at the autumn boat shows 2021.

The presentation of the 70HT comes as the sixth 25.5 metre 80HT superyacht Attitude nears completion for delivery in April.