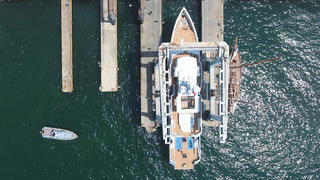 The 39.30 metre superyacht Sexy Fish has been launched this week, Tansu Yachts has announced. The Turkish yard also revealed that the first sea trial was “super successful with a top speed beyond expectations” and that the yacht will attend the 2016 Monaco Yacht Show.

Hull number four in the Tansu Yachts Mothership series, Project Cutlass was first revealed in November 2012, with the yard looking to build on the success of Preference, which was launched in 2011 as Nomade.

In March 2016, David Legrand of Fraser Yachts sold Project Cutlass to a couple who are "passionate about art and design". Legrand described the yacht as “a new chapter” for the yard. “Providing the state of the art design, high quality construction, timely deliveries and reliable engineering, Tansu has proven itself as a world-class shipyard,” he added.

Interior details of Sexy Fish are yet to be revealed, however it is understood that her 7.6 metre beam encompasses accommodation for ten guests split across five cabins, including a master suite, two double rooms and two twin rooms. Other key features include an upper-deck skylounge, which is accessed via an internal superyacht staircase.

Power comes from a pair of Caterpillar C32 engines for a total output of 2,900hp and a top speed of 16 knots. When trimmed back to her cruising speed of 12 knots, Sexy Fish will have a maximum range of 3,500 nautical miles.

Other superyacht projects on the Tansu Yachts order book include the 43 metre Project Cyclone and the 38.4 metre Tigershark One.