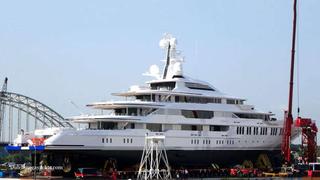 Oceanco's project Y710 superyacht is on the move.

The 10th superyacht in the Dutch builder's Y series was spotted on the move to Rotterdam. She has been moved to the dry dock for her launch and will imminently return to the yard for her sea trials.

Y710 features naval architecture by Azure Naval Architects in collaboration with Oceanco's in-house team, and exterior styling is by Espen Øino. She will accommodate 14 guests in a master suite, to VIP staterooms and four double cabins. Powered by twin 3,600kW MTU engines, a top speed of 18.5 knots is expected. Launch is scheduled for later this year.

Also underway at Oceanco is Y711, the 84.8 sailing superyacht built in conjunction with Vitters. Y711 arrived at Oceanco this January and is expected to launch in 2015.