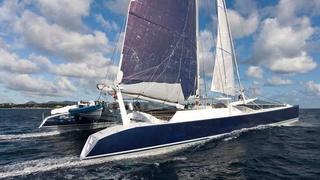 Fancy a spin on a super sailer that would leave the average superyacht in its wake? This weekend, after the thrills and spills of the St Barth's Bucket, Fraser Yachts is offering potential clients and their captains the chance to inspect and sail on Swift, the world's fastest sailing catamaran.

The sailing trials are likely to be after the Bucket sailing finishes on Saturday 24 March.

Formerly known as Orange and more recently Gitana 13, the 32m racing catamaran was converted into an equally fast cruiser in 2010 and is still capable of reaching speeds of over 30 knots under sail.

This extraordinary racing catamaran was designed by Gilles Ollier and built at the Multiplast yard in 2000. As a performance racer she notched up numerous achievements and accolades including Innovation Explorer for the Around The World Race for G Class catamarans and the 2002 record for the Jules Verne Trophy as Orange. Ellen MacArthur sailed her as Kingfisher 2 in 2003 and in 2006 she joined the record-breaking Gitana Team, racing under the name Gitana 13.

She has set quite a precedent for gobbling up nautical miles - taking 43 days to sail New York to San Francisco, 11 days from San Francisco to Yokohama and 41 days from Hong Kong to London. Maybe a bit more than a weekender, but still an exhilarating ride without regard for the price of fuel.

Jacky Setton bought her in 2010 to travel the South Pacific, and she underwent a six month refit at Lorient, transforming her into a cruising yacht with light and comfortable accommodation for up to 6 guests. Even so, special care was taken to keep the weight as close as possible to her ’round the world’ racing configuration with only 3 tons added in total.