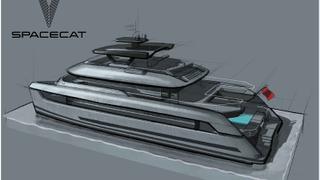 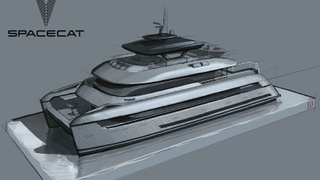 Accommodation will be for a total of 12 guests in one master cabin, two doubles and two twin cabins, one with two Pullman beds. The crew quarters, meanwhile, will accommodate eight staff in one double captain’s cabin, two twins and one triple cabin. All cabins on board are ensuite.

Exterior features include a swimming pool aft and plentiful deck space for storing tenders and toys.

Power will come from four Volvo IPS 1050 engines for a top speed of 21 knots and cruising speed of 16 knots.

The yard revealed that construction on the first model will begin next month at SilverYachts’ Chinese facility in the Guangdong Province.

The yard will be the main facility for the construction of the new series, with highly specialised aluminium fabricators working with SilverYachts’ Australian management team. The yard also announced plans to open a second Chinese facility as part of its expansion in the region.

Other projects underway at the Western Australian yard include the 85 metre Silver Loft, which is understood to be nearing completion.