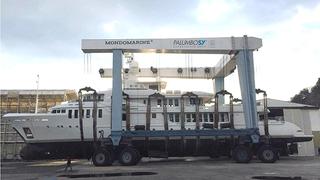 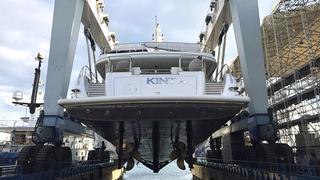 The 53.2 metre Turquoise motor yacht Kinta has been hauled out in Savona as the first refit and maintenance project for the recently formed Savona Superyachts firm.

Established at the beginning of the year after Palumbo Group acquired the former Mondomarine facility on an initial six-month lease, Savona Superyachts currently employees nine workers whose jobs were put at risk when the yard collapsed in late 2017. In a statement, Palumbo Group added: “The objective is to proceed subsequently, following the expected final acquisition, to the reabsorption of a large number of Mondomarine employees of Savona.”

Built from a steel hull and aluminium superstructure, Kinta (ex-Vinydrea) was first launched in 2008. She features exterior styling by Paolo Caliari and her interiors were refreshed in 2012 to a design by Jean-Guy Verges.

Accommodation is for up to 12 guests split between six staterooms including a full-beam master suite on the main deck, a VIP suite, three double cabins and a twin room. Meanwhile, her crew quarters allow for a staff of up to 12 people.

Power comes from a pair of 1,750hp Caterpillar 3512B diesel engines for a top speed of 16 knots. When trimmed back to her cruising speed of 13.5 knots, Kinta boasts a transatlantic range of 4,000 nautical miles, drawing on a total fuel capacity of 100,000 litres.

The acquisition of the Savona site takes the total number of Palumbo Group facilities in Europe to eight.