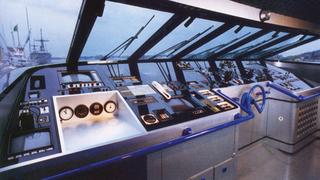 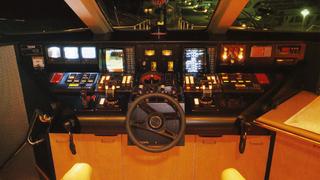 How to choose windows for superyacht wheelhouses

Windows play an important role in the design of an efficient superyacht bridge. In addition to the obvious – clear views and safety (in terms of strength) at sea – there are other considerations that must be addressed. Glare, reflections and obscured vision are the three culprits, and, unfortunately, they can ruin a well-designed wheelhouse.

Captain Emile Bootsma of Blue Moon says visibility provided by the bridge’s windows is critical to the vessel’s safe operation.

‘It is the most important consideration in bridge design,’ he says. ‘Navigation by day or by night is still very much a visual exercise, and I have seen too many bridges where the visibility is so poor that you could barely see your own bow, let alone any other ship that may be navigating in your vicinity.

Traditional windows that slope aft at the top may look more pleasing from an exterior styling perspective, but they become problematic at night by reflecting light from the console, a condition known as backscatter.

An example of the reflection problem can be seen in the 38.4m motor yacht Time, designed by Tom Fexas and built in 1987 by Palmer Johnson.

The boat was avant-garde in many ways and had a state-of-the-art wheelhouse. Unfortunately, the rake of the wheelhouse windscreen was quite severe, and at night, the reflections from the electronic displays (CRTs in those days) and lights from the control panels made night operations difficult at best.

This type of window also results in increased heat gain during the day that adds to the load required for cooling.

The heat gain can be mitigated to some extent by using a longer exterior brow and by installing glass with coatings to reduce thermal transmission. But of the three basic window styles, the direct sunlight will have the greatest effect with this one in terms of thermal loading and in terms of maintenance, unless materials are chosen that will fare well under constant exposure to ultraviolet and infrared light

Another problem can occur with aft-sloping windows, as illustrated by the 44m Heesen L’Aquasition.

In this boat, which had award-winning styling by Gerhard Gilgenast, the acute angle of the windscreen resulted in reduced headroom in way of the wheelhouse console. The solution: the helmsman would remove a teak grate in the sole, allowing him to stand in a recessed stainless-steel pan, thus providing enough headroom to perform his duties without craning his neck.

Although moderately effective, this was an unacceptable issue that should have been resolved early in the design process.

The number and placement of mullions can affect visibility. Put too many panes in a windscreen and the mullions will affect the helmsman’s oblique visibility by obscuring the glass. It should be carefully addressed, because large panes, as desirable as they may be, require greater strength, thus adding significant weight, which results in the need for heavier mullions… and so the design spiral begins.

There is, however, a benefit of aft-sloping glass. Generally, a bridge console that is installed below aft-sloping windows must be positioned farther aft in the wheelhouse to reduce height conflicts between crew and the windows. This means that the consoles are deeper fore and aft and have increased space inside them for equipment, allowing it to be located in close proximity to its control devices.

Vertical (plumb) windows have a far more contemporary look and will reduce reflections from equipment in the console and glare from the sun, but they will create reflections on the panes along the opposite side of the boat. Windows that slope forward at the top, often called ‘cab’ windows, offer exceptional day and night visibility, which is why this style is used almost exclusively on commercial and military vessels.