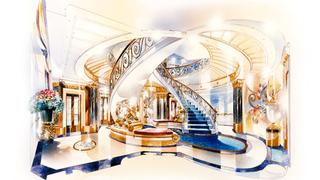 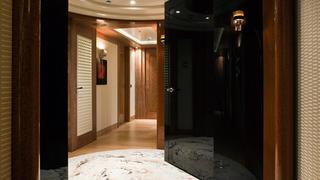 While a yacht cant talk, a top designer can teach her to sing like a diva. Evan K. Marshalls Diamonds Are Forever, Donald Starkeys Trident and Patrick Knowles Mi Sueño  to take three examples  salute boarding guests in operatic style. Each strives to stir passion in her admirers  not with words, but in the uniqueness and grandeur of her foyer design.

Here is where the tone is struck for the entire ensemble, perhaps the entire cruise. The welcoming aria must be sung architecturally, free of props, obstructions and furnishings that might get in the way of moving in or out, up or down.

I am disappointed when I see foyers on so many large yachts where all the yachts themes come together. As a designer, I see each space having its own function. Its not incumbent on me to be pulling all the details together. Is that really so important? The main thing is for people to enjoy themselves, have some theater, for them to say, Wow, I have never seen that before, says Starkey.

The foyer on the 65m Feadship _Trident _is a wow-worthy staging of mirrors if not smoke. To make the foyer feel bigger, Starkey designed a series of magical reflections surrounding the stairwell, a gambit that works in the foyer but would be too high energy, say, in a master stateroom.

Where the staircase meets the elevator shaft, Starkey created a gap. Inside the gap, he installed a lighting feature directed at the mirror-like stainless steel rails and plates along the walls. The ceiling, too, is adorned with this same steel plate. The effect is magical.

When a mirror runs into a plane such as a ceiling or wall at a 90 degree angle, it creates an illusion of infinitely extending space. Little wonder Tridents guests feel beamed up as soon as they step on board. The illusion is glamorous  but not funhouse glitzy. To balance out the brilliance, Starkey purposefully left the marble walls and floors unpolished.

Its a real conversation starter, says Starkey, whenever guests reach out to touch the marble. They wonder whether it is wood or stone; indeed, its hard to tell.