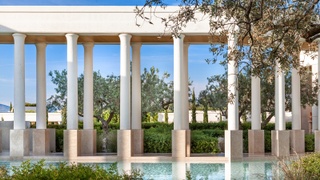 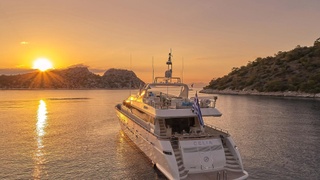 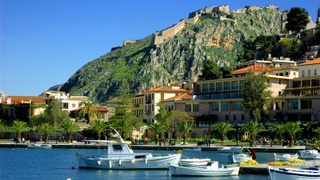 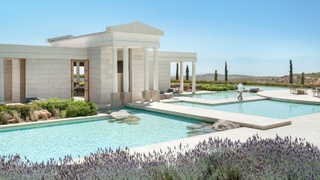 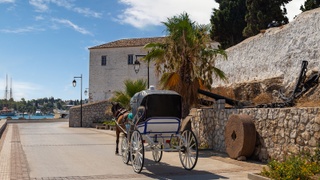 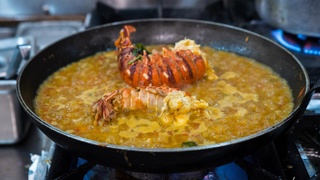 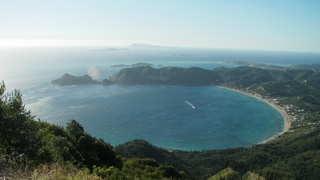 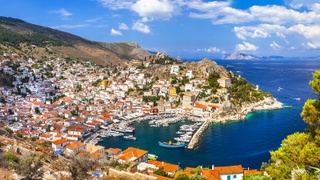 How Greece is making a comeback as a superyacht destination

Greece is once again the hottest holiday destination in the Mediterranean, after a decade of sailing through stormy economic waters. Risa Merl reviews the best hotels and restaurants in the Greek islands to visit by superyacht while exploring on board 35.5-metre Celia

I stand at the edge of the bathing platform on Celia, sun-soaked teak warming the soles of my feet while a breeze brushes my skin. The blue-green water beckons, clear enough to see to the bottom. With a lift of the arms and a bend of the knees, I launch myself from the boat into the cool ocean. We are alone in the harbour, save for two other boats – 36-metre Sole di Mare and 30.7-metre Martina – who are our travelling companions this week in a tandem-style charter exploring the Greek Riviera; a smattering of islands and mainland harbours that dot the coast of the Argolic and Saronic Gulf, serving up picturesque towns, luxury shopping and dining, unspoiled beauty and utter tranquillity.

I had boarded Celia in Nafplio, one such picturesque town that is overlooked by a commanding fort on the hillside, famed for its 999 steps (so local legend has it – in fact it’s 857) to reach the summit. Nafplio’s quintessentially pretty Old Town is defined by colourful buildings dripping in greenery and floral blooms. Its narrow, pedestrianised streets are dotted with outdoor cafés, high-end boutiques and art galleries. It’s all a stone’s throw from the harbour, where the Greek Yachting Association hosts the annual Mediterranean Yacht Show.

This year’s event saw more owners than ever register their interest in attending, and while fewer boats were actually on display than the previous year, it was only to make room for larger yachts, such as 85-metre O’Ptasia. As I peruse the boats before setting out on the trip on board Celia, I keep hearing from brokers and captains how the Greek charter market is booming. I’m told many new yachts are joining the Greek charter fleet – including the previously private Celia, making her charter debut after a thorough refit that has left her looking brand new – and how this year is predicted to be the best yet since Greece took a double- barrel hit with a financial and refugee crisis. “The Americans are back!” says Celia’s Captain Nasos Grammatikos. As an American, I laugh that our arrival en masse should be greeted with such acclaim, but I understand his sentiment. Some owners and charterers remained loyal to Greece throughout the troubles, but many more clients fled the scene until things settled down. Now that calm appears to have arrived.

It’s not just yachting people who are reclaiming Greece. Onshore, the new Four Seasons Astir Palace has opened just outside Athens, while the incredible Amanzoe luxury resort, on the east coast of Greece’s Peloponnese region near Porto Heli, is expanding its palatial grounds, with new villas due to open this year. There is also a new wave of money coming from abroad. “We are seeing a bigger influx of foreigners buying homes in Greece, and quite a few investments happening in the hotel sector,” says Katerina Katopis, director of Dolphin Capital, owner of Amanzoe – referring to the opening of the new Four Seasons and the new One&Only resort being developed in Kéa in the Cyclades.

Heading out to explore what’s attracting this investment, from Nafplio we cruise towards Spetses and anchor in the stunning Korakia Bay off the Greek mainland. The anchorage is in the eyeline of Amanzoe’s minimalist but chic beach club and the Acropolis-inspired resort is perched on the hilltops high above. The sheltered stop-off means guests can easily head to shore for some pampering in its cavernous spa or to dine on washoku (Japanese) cuisine at its Nama restaurant. Amanzoe can also arrange for one its famed Aman spa treatments on board.

The yachts’ captains use the quiet bay to moor our three yachts so they are tied together side-by-side, buffered by buoys, allowing guests to step over the bulwarks from one boat to the next. I have seen my fair share of raft-up parties, but usually with much smaller craft, so it is impressive to see three 30-metre-plus boats joined together. The yachts are also expertly moored, with a stern line tied to rocks on the shoreline, allowing us to enjoy the crystal clear, shallow waters. I swim laps between shore and the boat, the ideal distance to get in a bit of a workout before lunch on the aft deck. “This is the difference with Greek captains,” explains Popy Kaia, charter director of Atalanta Golden Yachts. “They know the secrets of where to go and how to tie up to shore – they aren’t afraid to get in close, so you don’t have to be anchored far out and tender in.”

Summer in Greece may be more commonly associated with partying in Mykonos or dodging tourists to scope out the sunset in Santorini but this corner of Greece – nicknamed the Greek Riviera – offers a quieter pace of life. “It’s very close to Athens, but what’s wonderful is the nature – it is unspoiled, lush and green, and there are a lot of coves everywhere, so you can take your boat and be alone, even in August,” says Katopis. “The weather is quite mild all year, and you don’t have the strong winds of the Aegean, but you always have a nice breeze in the afternoon to cool things down.” Captain Grammatikos agrees that this area is less formal than other yachting hotspots. “It would be unfair to compare it to Monaco. It’s relaxed here, more like Cap Ferrat, if you’re speaking about the French Riviera, or maybe even the Hamptons in America,” he explains.

As we cruise to our next destination, Spetses, we pass a bounty of gorgeous mainland villas stretching from the hilltops to the seaside. We arrive at the quaint island, which is car-free save for a handful of taxis, at dusk and are greeted by two horse-drawn carriages. Once ashore we are whisked along the winding harbour path to the Poseidon Grand Hotel as the sun dips below the horizon. The sunset is unreal, like strokes of an impressionist painting brought to life, adorning the sky in pink and orange.

The next morning, I head out on foot to explore Spetses’ narrow streets, which are lined with fashionable boutiques and cafés. One of the things that makes Spetses so special is that it has only a few hotels. As a result, not a lot of “regular” tourists come here and instead it’s populated by rich Greeks who own or rent villas. Its bustling harbour front is dotted with restaurants that kiss the water’s edge, such as Mourayo, which is housed in a 200-year-old building decorated with pieces from sailing boats – such as a chandelier over the bar made from a bowsprit – and has been run by the owner’s family for four decades. The captain of Celia’s favourite place to send guests for a meal onshore is Tarsanas, located right on the shoreline, which is renowned for its simple but sublime fresh seafood dishes and water views.

Away from the towns in this region there is no shortage of pretty little harbours and coves to duck into during the day for swimming and watersports. On the northern tip of Hydra we moor in Agios Giorgios, or St George, thus named after the little church on shore, painted white with a bright blue door matching the sea. Pine trees carpet the hillsides, covering the land in a rich emerald. The trees have been shaped by the wind – the branches point vertically while the trunks lean out as if trying to peer closer to the water. A few guests head ashore to explore – for those who are desperate to stretch their legs, you can hike from the church up to the summit of a small peak that looks over the harbour. “The views are amazing from there,” says Kaia. The rest of us take to the water toys, climbing on to the electric surf boards, paddle boards, Sea-Doos and jet skis.

Though the cruise to get here felt quite breezy, as soon as we tuck into this cove, the wind dies down and it feels deliciously warm despite it only being May. These cruising grounds are protected by the fierce Meltemi winds that overwhelm the Cyclades in summer. Captain Grammatikos explains that even in July and August when the Meltemi blows in from the north, respite can be found here. He recommends adding the Greek Riviera to any Aegean Sea itinerary. “It’s always good to combine this area with the Cyclades, and you can duck in here when the weather isn’t as good or the winds are too strong,” he says. “And even if the winds are higher, the water never gets too rough and you can always find a place to anchor.” June and September are his favourite times to cruise in Greece, when it’s not as hot nor as crowded. “You could even enjoy this area and the Cyclades well into October,” he says. “The water is warmed from the summer and the days are still perfect. You just might need a layer as it starts to get chilly in the evening.”

On our last night we moor in Hydra, the idyllic island that is entirely free of motor vehicles. The harbour is ringed by hills that are covered in houses. In July and August, Hydra is heaving. But now, at the beginning of the season, the cafés that line the harbour and the streets that snake up towards the hills surrounding it are quiet. While it’s true that Greece is gaining in popularity, by travelling here out of peak season – so May, or September to October – you’d hardly know it for the sense of solitude that abounds.

We climb up the hill that leads to the famed lookout point where sunset admirers bask in the glow of the setting sun. Just at that moment, as if on cue, a pod of dolphins appears, diving and cavorting in orange light that the lingering sun is casting on the water. Like the dolphins, Greece seems to be filled with a renewed energy that is enchanting for those who sail here. But this emerald and turquoise corner of the Aegean certainly hasn’t lost any of its quiet charm.

Celia is managed for charter by Atalanta Golden Yachts and her weekly charter rate starts from €65,000 per week. atalantagoldenyachts.com

5 of the best beaches in Greece and its islands

Top 5 waterfront restaurants in Greece and the islands

The best yachts for charter in the East Mediterranean

Island of the sun: Exploring the wilder side of Rhodes