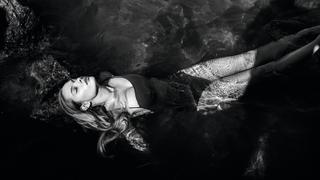 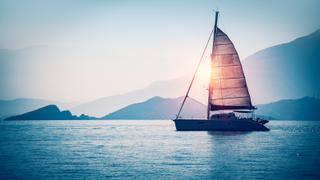 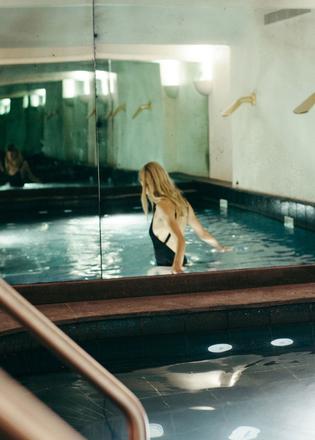 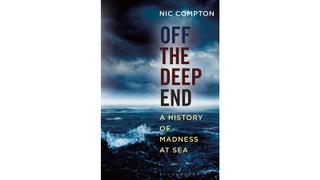 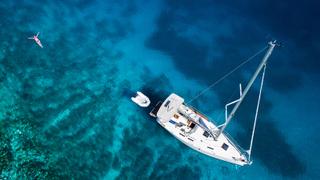 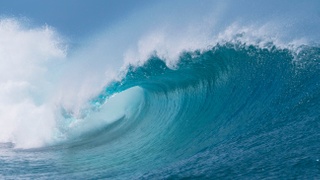 Sea of tranquility: The sensational health benefits of sailing

Whether it’s the negative ions in the air, potassium in the water, or the freedom from everyday life, being at sea is good for you, says Nic Compton...

Wesley walked forward and breathed the salt-seeped wind deep into his lungs. He pounded his chest joyfully and waved the broom around his head, and since no one was around, he hopped around the deck like a gleeful witch with his broom. This was it! That air, that water, the ship’s gentle plunges, the way a universe of pure wind drove of the Westminster’s smoke and absorbed it, the way white-capped waves flashed green, blue and pink in the primordial dawn light, the way the Protean ocean extended its cleansing forces up, down, and in a terrific cyclorama to all directions.”

This is the young Jack Kerouac writing in his first novel, The Sea is My Brother (unpublished until 2011, when Penguin released it), drawing on his own experiences in the merchant navy in the 1940s. The detail of the broom aside (his character Wesley was a deckhand), it’s a description anyone who has witnessed sunrise at sea will relate to. There is something euphoric and elemental about being out at sea, the deep throb of the engines below, the determined progress of the boat forward through inhospitable and often dangerous elements, that makes us feel more alive than almost anything else on earth. At its best, it can sweep away the clutter of our daily lives and help us reconnect with who we really are. And recent research backs up this long-held instinct that the sea is good for our health, both physical and mental.

The benefits of being on, near or in the sea have been felt since ancient times. Both the Greeks and Romans used salt to exfoliate the skin and took baths in warm salt water to help them relax – what’s now known as thalassotherapy, from the Greek word thalassa, for “sea”, and therapia, for “treatment”. Hippocrates and Herodotus were both fans, and playwright Euripides’ character Iphigenia said: “The sea washes away the ills of humankind.”

Much later, the 19th century French historian Jules Michelet echoed the sentiment: “The earth begs you to live; she offers you her best asset, the sea, to restore you.” And Michelet also had like-minded contemporaries: the idea was taken to an extreme by French biologist René Quinton, who discovered the chemical make up of seawater is remarkably similar to that of human and animal blood. To demonstrate his theory, he drained as much blood from a live dog as he could without killing it, and replaced it with seawater. The dog not only survived, but its blood soon returned to normal. Although his approach was radical, injections of seawater were used in the 1920s to treat nervous diseases in children and, later, skin infections, lumbago and obesity in adults. The practice carries on to this day – albeit in smaller quantities than those advocated by Quinton

The more lasting practice of sea bathing really started with the advent of coastal resorts in the 18th century. At the centre of this movement was Dr Richard Russell, from Lewes in East Sussex, who in 1750 wrote a treatise called A Dissertation on the Use of Sea Water in Diseases of the Glands, which explained how seawater could be used to treat “scurvy, jaundice, King’s evil, leprosy and the Glandular Consumption”. The book included recipes for potions with ingredients such as cuttlefish bone, crab eyes, woodlice, viper flesh and syrup of violets, all to be imbibed with several pints of salt water.

Russell was also a great advocate of “cold bathing in the sea” to treat scurvy, madness, bites from mad dogs, and impotency “arising from the immoderate use of venery” (ie, too much sex). Three years after his book was published, he opened a health spa by the sea in the nearby fishing village of Brighthelmstone with the express purpose of promoting sea cures and sea bathing in general. The young Prince George (later King George IV) was one of the visitors and was instrumental in transforming the former shining town of Brighthelmstone into the modern coastal resort of Brighton.

Despite the sometimes wacky theories of early pioneers, subsequent research proved the sea really does have a restorative effect on both body and mind. Its high levels of salt (3.5 per cent) and potassium (1.1 per cent) encourage healing, which can cure skin complaints such as psoriasis, while its magnesium content (3.7 per cent) helps the skin retain moisture and become more flexible. A report by dermatologists in the Oxford-based medical journal Skin Research and Technology confirms that seawater is good for dermatitis, while researchers at the University of Alicante have recently demonstrated that it boosts the immune system and guards the body against viruses and bacteria.

The healing properties of seawater – or at least a particular type of Mediterranean seawater – are so powerful that one London health club has taken to transporting the stuff 1,500 miles across Europe for the benefit of its wealthy clientele. The South Kensington Club has arranged for a fortnightly delivery of 25 tonnes of seawater from the base of Sicilian volcanoes to fill its “watsu” pool. Celebrities such as the Delevingne sisters, Cara and Poppy, Alexa Chung and Pippa Middleton are said to be among the club’s aquatic clientele.

Being by the sea also helps our brains function better. Sea air is full of negative ions that increase the body’s ability to absorb oxygen, which in turn makes us feel more energised. Negative ions also help balance the body’s levels of serotonin – the chemical that controls mood – to guard against depression. There are also theories that the colour blue is intrinsically calming, that the twinkling patterns made by the sun’s reflection on the sea is somehow soothing, and that the repetitive sound of waves breaking makes us feel more relaxed. According to Orfeu Buxton, associate professor of biobehavioural health at Pennsylvania State University: “These slow, whooshing noises are the sounds of non-threats, which is why they work to calm people. It’s like they’re saying: ‘Don’t worry, don’t worry, don’t worry.’”

Russell’s pioneering concept of swimming in cold water, reinvented as wild swimming, has also gained a new following. Its 21st century proponents claim that immersing the body in cold water acts as a mild “stressor” that triggers a rush of adrenalin and activates the immune system. The adrenalin makes us feel more “alive” and acts as a natural painkiller by diverting our attention away from our aches and pains. Research by Nasa has shown that regular swimming in cold water brings down blood pressure, reduces cholesterol levels and encourages healthier distribution of fat. It also suggests that wild swimmers might have better sex lives, since splashing around in all that cold water apparently increases the levels of testosterone in men and oestrogen in women.

The sea, then, is good for us. But what about enjoying it from a yacht? There are some obvious physical benefits. Just moving around a boat at sea forces you to use a whole host of muscles you might not normally use in order to counteract the movement of the waves (a yacht is the world’s most expensive power plate). And even if you’re not involved in operating the boat, the leisure activities you’re likely to partake in, such as swimming, waterskiing and windsurfing, are more healthful than on a land-based holiday.

More subtle perhaps are the psychological benefits of sailing. Being at sea provides an opportunity to take a break from the demands of 21st century life. Time becomes more elastic and you measure your routine by the sunset, sunrise, and phases of the moon. Turn your smartphone off and you can get into a natural rhythm of the sun, the stars and the sea.

Recently, sailing has been used to help war veterans suffering from post-traumatic stress disorder (PTSD). The Falmouth, UK-based charity Turn to Starboard was set up in 2012 by a former RAF medic, Shaun Pascoe, himself a veteran of the Afghanistan conflict who was invalided out of the air force with PTSD. The organisation was gifted a 28 metre schooner by the Prince’s Trust, which, in 2016 and 2017, sailed around Britain crewed by war veterans.

“The effects of sailing are quite profound,” says Pascoe. “You’re taken away from land and reminded that there’s a big wide world out there. And suddenly your problems become smaller. On a practical level, you don’t have a phone on you, no email, no car key in your pocket – nothing to remind you of your day-to-day worries.”

Researching my book Off the Deep End: A History of Madness at Sea, I came across hundreds of cases of sailors who had lost their minds, sometimes due to dramatic events, such as injury, shipwreck or starvation, but more often because of mundane personal issues, such as bereavement, unrequited love or difficulties at work. The reasons people go mad at sea seem mostly the same as the reasons people go mad on land – except that the sea acts as a lens to magnify their troubles. When you’re out at sea, there really is no escape, and you either deal with your problems or become consumed by them.

One of the most moving stories I came across was about one of Turn to Starboard’s own instructors, Dan Fielding. By 2015, 11 years in the Royal Marines, including stints in Iraq, Northern Ireland and Sierra Leone (four times), had taken their toll. He soon qualified as day skipper, then yachtmaster and instructor. In 2016, he took part in the Round Britain Challenge as first mate, and the following year came back – this time as skipper. From nervous wreck to skippering a 28 metre yacht on a 2,000 mile journey around Britain in the space of just two years, his transformation was complete.

“I don’t think I’ll ever get over my PTSD,” he says. “I’ve learned how to manage it, but I’ll never lose it. Sailing gives me a little respite. When I’m on a boat, I leave everything behind on land. The moment the engine’s switched off, and the sail fills in with a kick, I get that amazing feeling; being pushed along by the wind, hanging there in the natural elements. It’s what keeps me grounded – I couldn’t be without it.”

Which brings us back to Jack Kerouac’s description. For, whatever the scientific basis, it is the sheer physical sensation of being at sea that creates a special kind of magic. We feel it in the soles of our feet, as the passing of the waves is communicated through the movement of the ship, and we feel it in our lungs, as all those negative ions flood into our body. That physical sense of well-being is translated into a psychological contentment that is almost child-like in its simplicity and immediacy. We are being rocked into happiness.

Off the Deep End: A History of Madness at Sea by Nic Compton, is published by Adlard Coles, £16.99, bloomsbury.com

Queasy does it: The best sea sickness treatments