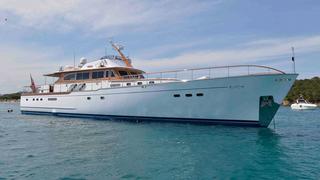 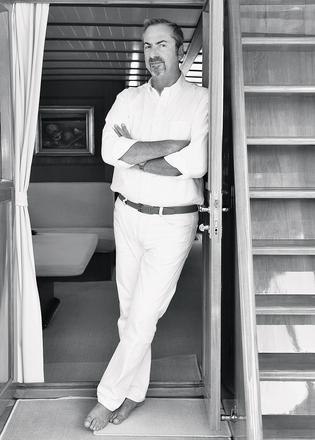 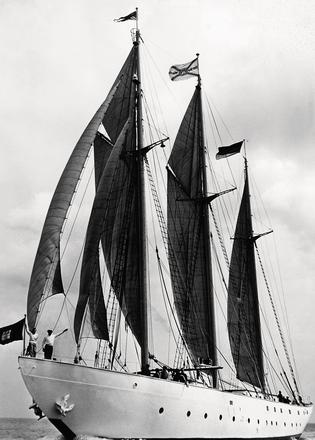 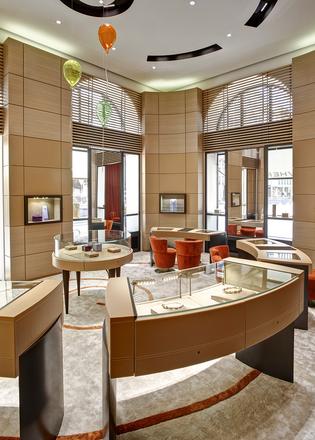 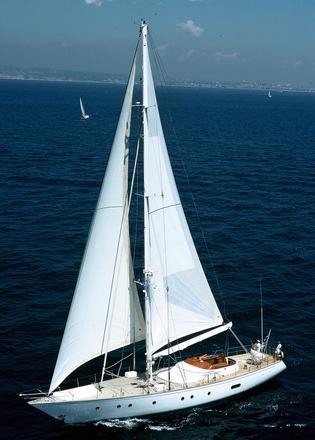 Whether it’s his gorgeous contemporary jewels for Vhernier or his modern classic yacht, Carlo Traglio knows beauty when he sees it, and creates it. Stewart Campbell joins him on boardArdis II.

There’s a perfect boat taking shape in Carlo Traglio’s head. He never stops designing and refining, borrowing ideas and adapting layouts from boats he visits – even ones he doesn’t like. “Look at this boat next to us,” he says by way of an example. “It’s really horrible.” A very famous sailing boat down the quay, meanwhile, he labels “a disaster”. But both have some merit in the straight-talking Italian’s eyes. “They’ll have a detail that you’ll see and say, ‘This is good, this is nice.’ And it might be something you keep in your head for your next boat. It’s the same thing for jewellery – details, details, details. The sum of all those details makes the difference between a good or bad boat or a good or bad piece of jewellery.”

These are the twin passions of Carlo Traglio. Cut him in two and one half would be diamond, the other teak. He’s owned Italian jewellery house Vhernier since 2001 and the designs for all the company’s sculptural, contemporary pieces begin in his imagination, often when sitting where I am right now, in the cockpit of his current boat, 30 metre Ardis II. The mahogany motor yacht will be familiar to anyone who’s walked the docks of Porto Cervo and stopped to stare for a while at the yacht’s handsome stern tugging gently on her lines. She looks classic but was actually built new in 2007.

“People who don’t know the boat ask me if she was built in the 1950s,” Traglio says. “It was built in an unbelievable way. It will last forever. In 100 years this boat will be here.” Before Ardis II Traglio owned the 24 metre PeriniMalizia, which he bought from famous royal at sea Prince Rainier III of Monaco. A history, then, of owning classic-looking boats but a business of producing gorgeous, modern jewellery. What’s going on?

“Classic jewellery – anyone can do that. Three stones, four prongs and finito. I like contemporary jewellery because it is so difficult to do,” he says. “With contemporary jewellery you have to have some knowledge of art, sculpture, architecture. Boats even. The shapes and materials we use are completely unusual in jewellery, and it’s very difficult to do. A nightmare, in fact. But I like to go further, always further.”

The big loves of his life took root early. He grew up on a superyacht, one of the most beautiful boats afloat, no less: Xarifa, the 50 metre schooner built in 1927. It was owned by his uncle, also Carlo, and the young nephew would spend each summer on board the yacht in Monaco, where it was moored permanently right outside the Piscine du Stade Nautique Rainier III. He was on a boat “from day one”, he says. “Not to have a boat is not familiar. I need to have a boat. Small, large, big, fat, it doesn’t matter. I need to feel the sea. I think it’s in my DNA.”

The Traglio fortune was made largely thanks to that American icon, Coca-Cola. The family was the bottler and distributor of Coke in northern Italy. The current Carlo took the reins of the family business after finishing a law degree in Lausanne, Switzerland, but stepped away in 2001 to concentrate his efforts on Vhernier, which now has 10 boutiques across the world, from Dubai to Miami.

He may have been on a boat from birth but jewellery wasn’t too far behind: he designed his first piece aged nine, for his mother. “It was a chain,” Traglio remembers. Not only did he design it, he made it. Before starting the law degree he took a year off and went to work for a jeweller in his home town of Como – not front of house; he was out the back with the artisans, working gold and setting stones. “I made that chain with my hands,” he says. “Between that first design and my most recent, it’s been around 50 years – a long time. But it’s not only jewellery and boats, but also houses. I like to do interiors: you know, this is wrong; this must be larger, shorter, higher or whatever.”

Traglio is the first to admit that his hand isn’t as skilled as his mind. While he does the very first concept sketches for new pieces, he relies on the rest of the creative team to turn them into precise designs, which are then modelled into silver prototypes. “Nine times out of 10, we throw them in the garbage and we start again,” Traglio says. “It’s very complicated, but a good challenge.”

Not even the law degree could divert the young Traglio. In lectures, everyone else was scribbling notes, but he was sketching. It was ever thus. “I was a different kid. When I was 14 and all the other teenagers were starting to go to the disco, I was in museums, exhibitions and galleries.” He doesn’t know where it came from, this appreciation; not his parents, certainly. “We were Coca-Cola partners for many, many years and not exactly involved in art. Involved in bam-bam-bam business, yes. So I don’t know where it came from.”

Such is his devotion to the brand that he’s on the road almost constantly, sourcing new stones. He’s not buying to order, but on spec. If he sees something he likes on his travels, he’ll store it in a safe until inspiration strikes. “I’m always searching and when I find a very special stone, I’ll do a one-off piece for very special customers. We’re talking over a million pounds, and usually it’s a beautiful ruby or diamond or emerald. But even with stones that are not that expensive, I want the best for the money that you will ever see in your life.”

Traglio has even discontinued pieces or jewellery lines not because demand dried up but because a very particular stone has become unavailable and he refuses to craft them with anything but the originally intended jewel. The line between a good piece and a bad piece is razor thin, he insists, and he’s not prepared to take the chance.

He points to one particular ring that sits firmly on the right side of that divide. It’s the Tonneau: 800 diamonds in a pavé setting. “Normally a jeweller would put one stone after the other, with lots of gold and less stones. I do exactly the contrary: more stones and less gold. I go against the commercial rule. Now, 800 stones is a nightmare. The setting is a nightmare. Is it challenging? Yes, but it is a pleasure for me. It is a passion.”

Art and architecture rank highly, too, although he’s recently turned away from the art market because of what he calls its “commodification”. “The market is completely poisoned by money. You don’t know if you’re buying a real artist or a piece of shit. Just because it costs a lot, doesn’t mean it’s any good. But people buy it because next year it will cost 30 per cent more – just like a commodity. So recently I’ve taken a little distance from art,” Traglio confesses.

Architecture remains and he claims to have been one of the first people to recognise the genius of French furniture and interior designer Christian Liaigre. “Twenty years ago nobody knew Liaigre and I did my house in the Hamptons with all Liaigre furniture. I was probably the first person to do it in America. People would come to the house and say, ‘Oh, who did this?’ and I’d tell them, and they’d always say, ‘Who is Liaigre?’”

You can imagine the sweaty palms at the boatyard when Traglio does eventually decide to commission his next, and probably final, boat. This is not a man who will accept second best. At least he knows what he wants – almost. “It will either be 20 metres or 40 metres,” he says. “This one is 30 metres, which is not a good size. You don’t get the benefits of a big boat or the fun of a small boat. In a 40 metre you get everything you need, and in a 20 metre you can just have two cabins and sacrifice a third to make a big bathroom. There must be plenty of outside space and I want a kitchen on the main deck. I like to cook and it’s so easy and comfortable to be all together, making food.”

He also demands a big engine room and generous crew quarters. “The crew must be very, very comfortable. Because otherwise these guys will hate you by the end. Most boats could not care about the crew, which is completely stupid. The crew must have space.”

As for guests, well, tough luck. Traglio is happy to sacrifice cabins to accommodate all this. “It will be an impossible boat to resell, but now I am at an age where I couldn’t care less. It’s not my problem any more,” he says.

Looking beyond our big, white GRP neighbour, there are some boats in town tonight that Traglio truly admires. He points to the big Perini P2 – “a great compromise between performance and comfort” – and Hetairos, about 10 boats down the dock.

“She’s fantastic,” he says. “A vintage flavour but very new.” He’s not just admiring these craft but studying and storing. With each glance the boat in his head solidifies: a curve here, a line there. She will, I have no doubt, be an absolute gem.