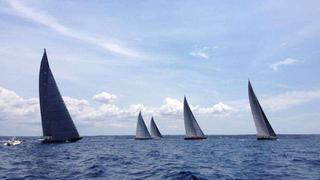 The first day of the Superyacht Cup in Palma de Mallorca, Spain, saw the five participating J Class sailing superyachts battle it out on the race course.

The J Class-only race pitted superyachts Hanuman, Lionheart, Ranger, Rainbow and Velsheda against one another on 20 kilometre windward to leeward course. This race of classically inspired beauties kicked off the Superyacht Cup festivities, which officially starts tomorrow for the rest of the fleet and runs 19 to 21 June with another windward-leeward and two coastal courses off of Palma. The J Class yachts raced for the honour of the perpetual King’s Hundred Guinea Cup, which will be shared by Hanuman and Lionheart, who took a tied win on corrected time.

At 1 pm today, the five J Class yachts set off, and four out of the five each held the lead at some point throughout the race. But at the end, Ranger came in the first over the line, Hanuman second, and Lionheart was not far behind in third. Many of the yachts have impressive professional crew members. Ranger, for instance, has multiple Whitbread and Volvo racer Erle Williams as skipper along with Finn, 49er and Laser helmsman Dan Slater is steering.

Stay tuned for daily coverage of the Superyacht Cup as the excitement in Palma unfolds.