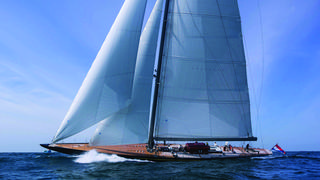 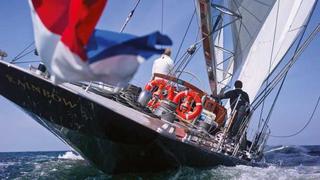 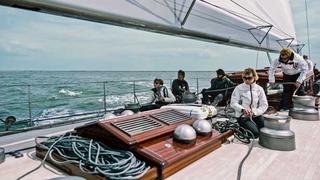 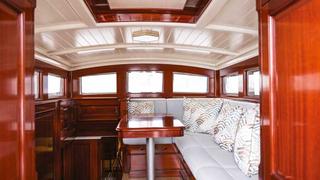 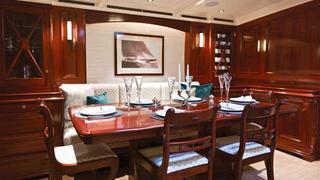 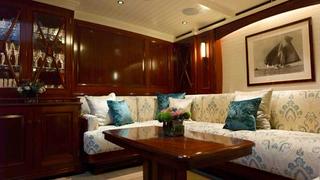 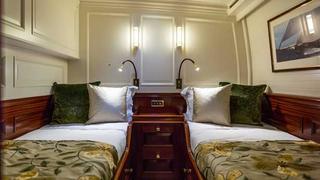 Something very special happens when the designs of the past are blended with the technologies of the present by craftsmen with timeless skill.

On 15 May 1934, the spectacular 40 metre J Class Rainbow was launched after a mere 100 days of construction at the Herreshoff yard in New England. Her owner, Harold Vanderbilt, was pleased William Starling Burgess’s design had been brought to fruition in time for Rainbow to defend the America’s Cup. And even more delighted when his yacht saw off Sir Thomas Sopwith’s Endeavour by four races to two.

Fast forward some 78 years and it’s not just the way those assembled for the launch of the ‘new’ Rainbow are dressed that is different. Like many large yachts of the time, Rainbow and Ranger did not survive the cull for metal in WWII. The second generation of Js is surfacing across the Atlantic on the boards of Dykstra Naval Architects and Hoek Design: Royal Huisman completed the replica of Hanuman in 2009, and another Dutch yard Claasen relaunched Lionheart a year later. Ranger had already been recreated in Denmark in 2004, and the launch of Rainbow at Holland Jachtbouw brings the J Class fleet to seven, joining the refitted Shamrock V, Velsheda and Endeavour. And there is more to come if the rumour mill is believed.

While the hull of the original Rainbow was made of bronze plates on iron frames, this new J has an aluminium hull built to the maximum performance rules of the J Class Association. Rainbow Mk.1 was essentially an empty boat with a deck, gear and rig, centred around a heavy mast constructed of aluminium plates. Mk.2’s mast is carbon and features complex hybrid and hydraulic technologies as well as a luxurious mahogany interior. And while 1930s races were based on elapsed time, today regattas see the super-Js vie for position based on velocity prediction program (VPP) ratings and a handicap system that facilitates genuine competition between ‘old’ and ‘new’.

That said, despite hailing from very different eras, there are still many similarities between the two versions of Rainbow. The Dykstra Naval Architects team faithfully followed the original lines plan and also opted for the classic approach when using internal stiffeners to ensure Rainbow could withstand the massive loads involved when sailing at full speed. Great effort went into respecting historical pedigree both on and below deck. And, as naval architect Jeroen de Vos points out, both Rainbows reflect a desire for speed and elegance by their owners.

The specialist Dutch manufacturer Bloemsma Aluminiumbouw built Rainbow’s phenomenally faired hull in eight months, including special frames to take into account the positioning of the rudder. The giant hull was then transferred to Holland Jachtbouw for outfitting.

Rainbow is the first J to not use conventional two gens/one main engine propulsion. She can be operated entirely on her Hy-Store Li-ion batteries, including sailing, navigation and hotel load. A lightweight 50kW Hy-Gen variable speed generator combined with the 50kW main engine integrated flywheel generator provide the power. The main engine replaces the second generator, while the other genset is a variable speed electric unit. The batteries can also be charged while sailing without losing more than 1.5 knots of speed.

As a result, Rainbow’s ecological footprint is significantly lower, making her more comparable to the original engine-less version. There is also a substantial reduction in sound levels both inside the yacht and out, offering the benefits of silent night-time sailing or docking.

‘The owner was very keen that Rainbow be built to Lloyd’s and MCA classification so she could be chartered and cruised,’ adds Rem. ‘This added to the complexity as there is no precedence for such a hybrid system. We had many discussions with Lloyd’s prior to installation and made specific changes like creating ventilation outlets for the battery boxes. It is a considerable achievement that this yacht from another era has achieved the stringent certification levels of the 21st century.’

Another crucial issue was to ensure sufficient hydraulic power for operating the winches and maximising their speed to meet the exceptionally high demands for fast handling that Grand Prix racing entails.

Rainbow has a fabulously flush deck, with the entire layout and all the equipment bespoke designed for the sail sets and the most likely racing manoeuvres. The lightweight aluminium winches are all custom made by Lewmar.

Everything above the 1930s original lines plan is state of the art on Rainbow. Her breathtaking rig features high-modulus carbon spars from Southern Spars, a carbon mast, boom and spinnaker pole, continuous carbon fibre rigging and North Sails 3Di racing sails. Unlike the other Js, Rainbow has a racing box boom with spreaders. This is much lighter than a Park Avenue boom and recreates the classic looks of the original Rainbow, which pioneered this type of solution for trimming the mainsail foot.

However impressive all the above may be, it is still the look and feel of Rainbow’s deck that most enchants. The solid mahogany sunken deckhouse and skylight are beautifully finished, involved months of hands-on craftsmanship by the woodwork wizards at Holland Jachtbouw and are truly an echo of an earlier age. Even the deckhouse roof is made of mahogany, not teak decking as is usually the case.

The aesthetic theme continues with the equipment, and there is none of the shiny stainless steel you normally associate with a superyacht deck. The winches have been bead-blasted by Inoferro to create an anodised effect and a grey colour also appears in the caulking between the teak planks. This solution looks more classic than the black colour deployed on modern decks and was inspired by the past, when the white plaster used to fill the spaces turned grey over time.

Below decks, Dykstra and deVosdeVries design have partnered with the yard to create an art deco style that matches the luxurious raised and fielded panelling in the same mahogany used above. This classic feel gives a sense of continuity between outdoors and in, as well as between past and present. And while the hybrid engine solution helped create space, careful planning was needed to fit all the pumps and instruments in a restricted space.

It is no mean feat that nothing is visible and while Rainbow’s narrow beam means the owner’s suite and two guest cabins are relatively small, they are up to the most resplendent superyacht standard, down to the marble in the en suites. There is a lovely dining saloon, too, and good accommodation for the permanent crew forward. Outside of the great regattas, Rainbow will offer a fine cruising experience to the owner and his guests.

There is another comparison between then and now. It is said that Harold Vanderbilt chose the name Rainbow back in 1934 as an expression of his hope that things might go better with the world after a period of economic recession. There are obvious parallels to today, and it would be good to think this new Rainbow might be one of the heralds of a brighter future for our industry.