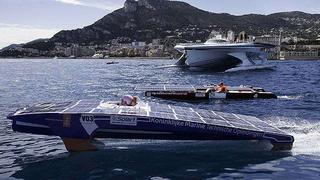 This first edition of Solar1 involved 25 teams from international universities – with a large majority from The Netherlands – which conceived and built futuristic vessels. The fleet was divided in three categories: the Open Class (with only one restriction – the length – 8m or less), the A class (maximum length 6m and four solar panels), and the one-design V20 Class developed by Vripack (designed to plane on foils).

On Friday, a fleet race took place on the open sea in front of Monaco. The iconic 31m solar-powered superyacht MSTûranor PlanetSolar followed the event as the jury boat. On Saturday, meanwhile, the event slaloms and one-on-one sprints were transferred in the middle of the harbour due to choppy conditions – a good opportunity for the public to have a closer look on these unusual vessels.

The winners were CLAFIS Private Energy Solar Boat Team II for the Open Class, Dutch Solar Boat Team for the A Class and Team Beluga Powered By Synergy for the V20 Class.

'It gives me great pride to see our principality reviving a golden age, remembering that in 1904 the first power boat races held here made a significant contribution to the development of the combustion engine,' said Prince Albert II of Monaco, president of host venue the Yacht Club de Monaco, during the closing dinner of the event. 'Monaco remains at the forefront of new technologies in the motor boat sector'

'The solar energy industry is expanding fast and those involved in the luxury yacht industry are very interested in its development,' said Sergei Dobroserdov, CEO of Solar1.

Many witnessing and participating in the event commented on the pioneering spirit of those taking part and organising it, which gave the feeling that anything was possible, and sometimes for a limited budget.