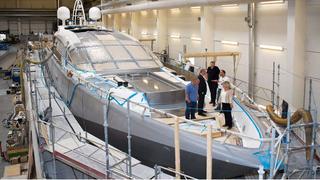 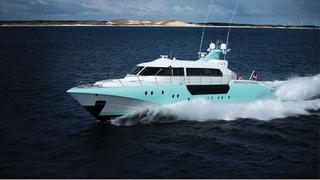 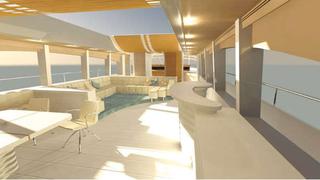 Clinging to the northernmost tip of Denmark, surrounded by drifting dunes and marking the boundary between the Skagerrak and the Kattegat, the ultra-chic, understated town of Skagen is an unlikely setting for a high-tech boatbuilding yard. But sitting on the town’s quay complex is Danish Yachts, builder of a series of advanced superyachts, including Butterfly (ex-Shooting Star).

A relatively young player in the superyacht market, Danish Yachts was set up in 1988 as a very high-quality joinery company which serviced small yachts. But in 2000, it moved into full superyacht construction, producing several notable builds over the next six years.

The first launch was the 33.5 metre, Tony Castro-designed sailing yacht Vera IV (ex-Fidel), _which was followed two years later by the replica J Class _Ranger. A third sailing yacht, Aventura, came in 2005, and in 2006 the yard launched Moon Goddess, a 35 metre ultra high-tech dayboat from the boards of Espen Oeino packed with 7,500hp and capable of hitting 44 knots.

The yard, which had become a family-owned business, had also moved into advanced vessel construction for the Danish Navy in 2004, developing the FRP-built Holm Class. With production starting at the end of 2004, six Holm Class vessels were completed and are now on active service.

This relative youth, however, does not equate to inexperience, and the technical, design, engineering and project management teams come with an astonishing depth of knowledge borne from backgrounds in commercial shipbuilding, design and project management. Further, with its roots in carpentry and in-house stainless construction all aspects of a build can be handled to the very highest quality – the detailed interior of Ranger being a fine example.

Now Danish Yachts is seeking to consolidate its position as an ecologically sound yard developing extraordinary custom vessels that incorporate the very latest in technology and build materials.

Enter Butterfly – named Project 116 during her construction – a sleek, 38 metre carbon dayboat that has evolved the Moon Goddess concept. Her stats speak for themselves – a top speed approaching 50 knots, futuristic interior design with acres of glass and a giant sunroof, the option for a 60 knot version, and a hull form that sets a new standard for large performance powerboats.

The idea for Butterfly stemmed from an investment company which wished to build a boat it thought it could sell – essentially, the fastest boat of the very highest quality.

‘Espen [Oeino] had come to us when he was looking for a yard to build Moon Goddess,’ says Per Hesselbaek, ‘so it was natural to go back to him for this one for the styling. For me, from the start the 116 was a 50-knot boat, and in reality we were starting from scratch, building something completely new and doing extensive tank testing.’

With design and engineering departments in-house, 90 per cent of the design work was done by Danish Yachts.

‘We took the experience of Moon Goddess,’ adds Danish Yachts project manager Allan Kastrup, ‘and then improved every aspect.’

The result is an innovative take on the open sportscruiser concept, with a single social deck comprising a large saloon area that leads forward to a futuristic wheelhouse with extensive windscreen elements. The saloon benefits from a huge, one-piece solid sunroof, while the aft doors lead onto a sociable aft deck, creating a large, airy and cohesive living area. Steps lead down on either side to the bathing platform, while the sidedecks lead forward to a sunpad area on the forward coachroof. Her interior is modern with strong Scandinavian influences, and one deck down the yacht will feature a large owner’s suite in the bows.

There are three further guest cabins, and a cosy television lounge can also be found down here, along with a midships galley and crew cabins. Of note is the work that has been done on soundproofing and the fact that all cabins are floating, an element that has been borrowed from Moon Goddess. ‘She had 7,500hp, but you could still talk even when standing in the galley, just next to the engine room,’ explains Hesselbaek. Adds Jens Sorensen, mechanical engineer at Danish Yachts: ‘Privacy is also key for a yacht based mainly in harbour, and acoustic privacy has been a key consideration of the design of Butterfly.’

Aft and to port is the access to the engine room, which houses the throbbing heart of this powerful beast – twin MTU 4000 93L 16V diesels tuned up to 3440kW, coupled to water jets which will also be capable of bringing the yacht to a dead stop from full speed in just three boat lengths. In fact, the engine room has been designed specifically to allow for a further four cylinders on each engine, an option that would push the top speed of the yacht to over 60 knots.

Of course, anything can go fast if you throw enough power at it, but there are two key elements in play with Butterfly. Firstly, the current engine configuration provides the best balance between green, grunt and economy which, when taking into account the lightweight construction, means better performance for less emissions.

Secondly, she is based on a new hull form designed and developed by Danish Yachts’ in-house technical and design team. While technical details remain secret, essentially the hull takes the form of a straight V with no chines other than the very outer edge of the hull and specially designed spray rails up forward.

‘We looked at previous boats to gauge how the hull should look,’ explains Kastrup, ‘and we think we’ve come up with the optimum design on this one. A normal high-speed boat will have a hump on the resistance curve, so will have to have interceptors to change the trim in order to get over the hump. But on _Butterfly _we don’t need them.’

And as the extensive tank testing has shown, there are more advantages.

‘As there is no real hump,’ adds Hesselbaek, ‘there is no set cruising speed – you can choose any cruise speed you want. It also means that at, for example, 25 knots Butterfly will be much more efficient than an equivalent yacht from other builders.’

With eco-awareness a central plank for the Danish Yachts yard, it is hardly surprising to see such considerations placed at the very top of the design brief.