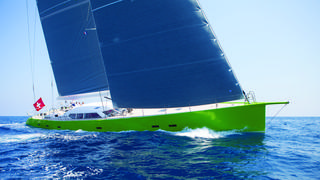 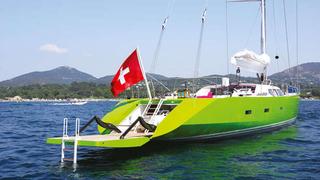 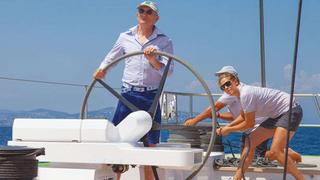 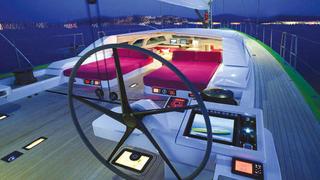 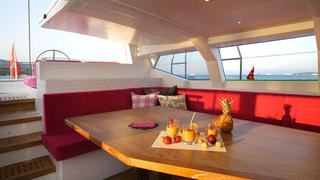 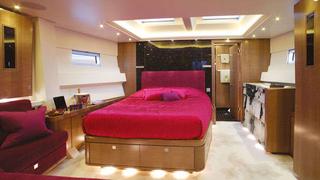 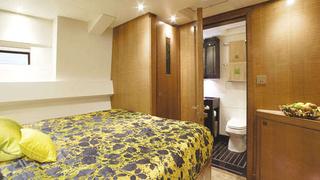 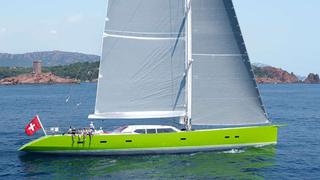 Long before any design appeared on paper, just two things were decided about Marco Vögele’s new yacht, the 33.4m Vitters Inouï – her colour and her name.

Vögele owned the Philippe Briand-designed and Royal Huisman-built 32m sailing yacht Gliss, whose performance in cruiser-racer regattas had been turning heads for a while, as had her spectacular turquoise hull colour. One of the main topics of conversation aboard any of Vögele’s yachts had always been ‘the next yacht’ and as both Vögele and his partner Francesca are in the fashion business it was natural that colour would be a key decision.

Trends were moving towards exciting new shades, and as they flipped through a range of new fabrics, a vibrant green seemed a suitably dramatic choice. A yacht of that colour would certainly excite the senses, so Inouï – meaning ‘extraordinary’ or ‘amazing’ in French – was an appropriate name.

But colour was not to be the only exciting aspect: the whole of Inouï's building team would turn out to be a Who’s Who of yacht design and construction. ‘We worked so well with Philippe Briand, who really understood what we wanted when building Gliss,’ explains Vögele, ‘that we decided to repeat the process.’

‘We wanted the yachting equivalent of a sports car,’ Vögele continues, ‘and with today’s crowded roads and speed restrictions, the appearance of a sports car is even more important than blistering performance. Sure, we wanted a fast and exciting cruiser/racer but also a comfortable yacht we could anchor off a beach and enjoy ourselves, and we didn’t want to compromise this by putting performance above everything else.’

In Vögele’s view, automated sail-control technology ‘tends to turn sailing into a purely mechanical and much less interesting process’. Briand estimated that this would set the yacht’s length at about 35 metres – the measurement at which traditional reel winches and slab furling could be employed.

To satisfy the owner of Inouï’s request for ‘timeless styling and sporty looks’ Briand’s design dipped into five distinct eras of yachting: the moderate beam of a yacht from the 1960s; a shallow sloping reverse-transom from the 1980s; a 1990s-style coach roof, blended with a plumb bow from the early part of this century; and a radical square-top mainsail inspired by the 2007 America’s Cup boats.

These elements were skillfully incorporated within an easily driven, 33.44m hull that features a retractable fin-and-bulb keel drawing just 3.75m when retracted and 5.35m down, ensuring optimum sailing performance as well as access to shallower anchorages.

The decision was also taken to build the complete hull and rig from carbon, while the standing rigging would be a state-of-the-art blend of carbon and Kevlar fibres – radical moves for a cruiser/racer. These hi-tech materials, aligned with the need for world-class construction, led them to Vitters Shipyard in the Netherlands, which together with Green Marine, its English partner company that specialises in carbon hull construction, could undertake the entire build of the hull and its vital technical elements.

Vögele’s long-time captain Stéphane Luca votes Green Marine as being ‘the star of the whole project’ in view of the company’s profound knowledge of carbon composites, its immaculate workmanship, and a revolutionary construction method that employed a two-part female mould for the hull. This latter technique made the topsides easier to laminate by allowing the lay-up team to work upright, while the extra thickness and strength created by the overlap of the scarf joint, which extends from 20cm above to 20cm below the waterline, giving added strength to an area where there is a higher risk of accidental impact.

The fact that this owner was unlikely to make ocean passages determined a ‘crew-aft and guests-forward’ layout, for which there were many other good reasons, including less noise from the dockside and yacht’s machinery, and better accommodation for the crew. The second good decision was not to have both an upper and a lower saloon (as the latter are used very rarely) and to invest the saved volume in better crew accommodation, while the owner’s need for just two guest cabins in addition to the master also reduced pressure on Inouï’s internal volume.

Vögele had long admired the work of Andrew Winch and engaged him for the project. The brief was simple. Disliking air-conditioning, Vögele wanted a comfortable ‘indoor/outdoor’ deckhouse that could be opened to the fresh air as much as possible, while below-deck areas should be richer and more detailed.

It is initially a surprise that the open plan deckhouse of Inouï, ringed with windows and simply decorated in white, with its limed-teak table and hot-pink upholstery, is from the hand of Winch, better known for his more elaborate and sophisticated designs. But the deckhouse, which features a fully glazed and totally retractable aft wall and two opening side windows, is a no-man’s-land – not quite a deck area, and not quite within the yacht – that makes any outside dining area redundant.

Forward, down five wide stairs, the rich and sophisticated decoration of the guest area is a step into more familiar Winch territory. The first surprise is that Inouï's master suite, located in the bow, is so spacious. Winch achieved this by extending the joinery outwards to the hull and leaving the frames and stringers exposed, a design element that, similar to the exposed mast and its tie rods in the guest passageway, makes this room feel like an authentic yacht’s cabin.

A pale carpet, hot-pink sofa covers and a matching embroidered bedspread, all brightly lit through a combination of large skylights and portlights, ensure a wonderfully open feel. The bedhead is also surrounded by sycamore, while to starboard is a Winch signature piece – a goatskin-covered chest of drawers.

The remaining two cabins – one twin-bunked in which the lower bed can serve as a small double, and the other a double – are smaller, but equally comfortable and well decorated. Amazingly, the whole of Inouï’s interior weighs just eight tonnes, while feeling totally solid and beautifully constructed – a real tribute to the skills of German furniture maker Oldenburger.

A combination of generous owner and clever design has also provided Inouï’s crew with a pleasant working and living area, accessed downstairs at the aft of the deck saloon.

With just a five-knot zephyr ruffling the Gulf of Saint-Tropez on the day we take Inouï out, there seems no great hope of an exciting sail, but we are wrong. In a slowly building six-knot thermal breeze, the ‘square-top’ mainsail and largest headsail effortlessly accelerate Inouï to eight knots, leaving practically no wake behind her.

Her captain Stéphane Luca attests that compared to a traditional aluminium rig with regular sails, the combination of 3Di carbon-reinforced sails and a full carbon rig from the sister companies of North Sails and Southern Spars, saves the weight of a pair of family cars perched on the middle spreaders.

Add to this Inouï’s lightweight carbon hull and deep fin-and-bulb keel, and her sparkling performance is understandable. Later, with the true windspeed indicator showing some 12.5 knots and the sails setting with the aerodynamic perfection of an aircraft wing, we sail to windward at 11.5 knots and tack through less than 90 degrees, while touching almost 14.5 knots offwind.

During her delivery to the Mediterranean, Captain Luca reported surfing at 17 knots off the Portuguese coast in 30 knots of wind without worry or effort. Indeed, Inouï steers effortlessly and tracks very precisely, despite this being a totally manual steering system. Indications are that this performance-cruiser is not going to be a slouch on the race course.

While the most immediately striking feature of Inouï is still the result of that early choice – a vivid green hull – the correctness of so many technical decisions taken since then can be seen in the quality of Vögele’s finished yacht, a boat that ticks all his boxes and sails like a dream.