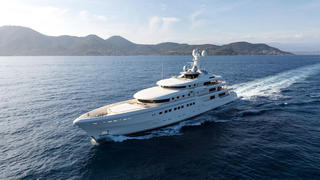 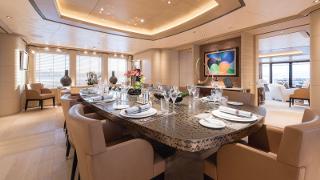 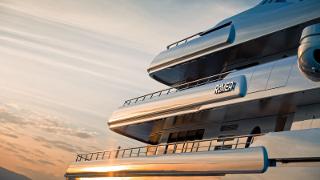 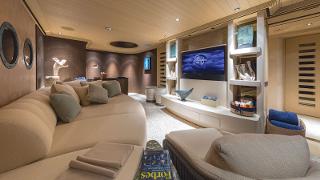 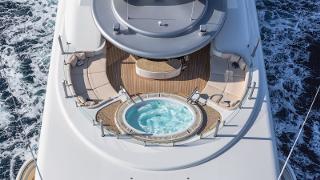 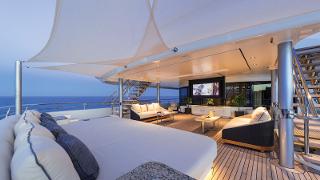 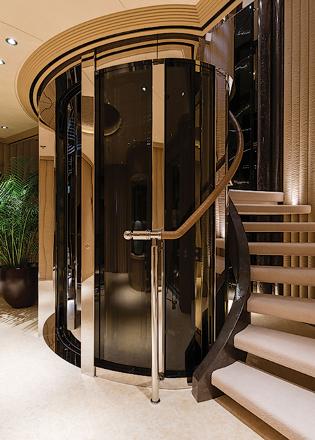 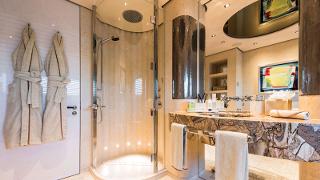 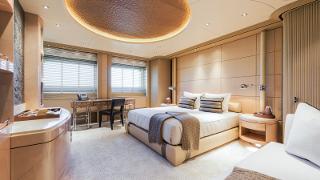 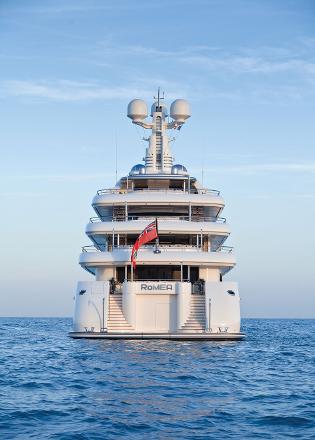 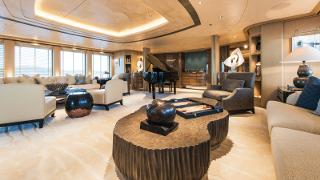 Out of this world interiors on 81m Abeking & Rasmussen yacht Romea

How do you do justice to the work that’s gone into making a superyacht? It’s a nearly impossible task, especially when the interior encompasses no fewer than 182 different finishes garnered from all over the world, as is the case on 81 metre Abeking & Rasmussen yacht Romea.

Take, for example, Romea’s dining table, a true work of art with a hand- carved base and a lacquered top. “The dining table is finished with a particular hard-wearing Japanese lacquer that was originally developed for the scabbard of Samurai swords,” says the interior designer, Terence Disdale.

Like everything else about the Samurai tradition — and really all things Japanese — the making of the sword’s scabbard was a fastidious affair, involving the sap of trees cured and applied following precisely timed steps to create (sometimes with the addition of silver or gold power) a light, resistant and precious lacquered finish.

“It is a very lengthy task to apply this lacquer as each of the twenty or so layers has to dry hard before the next is applied,” Disdale says. “To my knowledge this is the first time it was ever applied to such a large surface, which took many months. The effect relies on the final sanding, which means the finished effect can only be viewed when the table is completely done. Only at that stage can you fine-tune the other finishes in the room.” Carved oak panels, their grooves sanded by hand, echo the patterns on the table.

Many yachts with elaborate interiors have emerged from Germany’s family-owned Abeking & Rasmussen (A&R). Witness Amaryllis or Excellence V, each with Reymond Langton interiors, for instance; they both have an enormous amount of complex, beautifully executed details.

Another characteristic of the yachts launched at the Lemwerder shipyard on the Weser river in Lower Saxony is that they tend to be rather discreet, despite — or perhaps due to — their growing size.

As if to confirm this fact, the largest yacht yet delivered by A&R bears the name Secret. A Sam Sorgiovanni design, she left the yard in 2013 and her Jim Harris-designed interior has never been shown. Superyacht Romea’s identically sized predecessor, Kibo, was launched in 2014 and has also kept a low profile.

“We do seem to attract owners who seek privacy,” says Till von Krause, the yard’s director of sales. He says yacht clients appreciate that A&R is a family business and that they can speak directly to the company’s CEO, Hans Schaedla, who, in 2009, succeeded his father at the helm of the soon-to-be 100-year-old shipyard.

A little more visible than recent yachts to emerge from A&R, Romea made her world debut at the 2015 Monaco Yacht Show and is available to a rarefied group of clients able to afford its close to seven-figure weekly charter rate (once you factor in taxes and incidentals).

She is nonetheless a bit of an enigma. The owner’s representatives, Imperial Yachts, are reluctant to provide details on how the yacht came to be and the owners are, naturally, off-limits. Company representatives prefer to let the “oohs and ahhs” speak for themselves, and there were plenty of those during the well-choreographed show visits.

Romea will be among the largest yachts available for charter. Close to 269 feet in length, with an elaborate beach club encompassing a Finnish sauna and one of several media rooms, a beauty-dedicated area with massage room, walkaround decks that compare favorably to promenade decks on small cruise ships and an irreproachable, easygoing interior bathed in light, Ro_mea _will be a standout from the Mediterranean charter fleet that gathers at events such as the Monaco Grand Prix.

Imperial, with offices in Monaco and Moscow, prides itself on its professional and discreet service to its clients who seem to have in common the goal of building outstanding superyachts and keep themselves out of the limelight.

One of the first grand yachts that Imperial helped produce was Arkley, launched in 2009 at Lürssen, followed a year later by the Amels’ Bel Abri. The company works with the world’s leading shipyards and designers but also likes to keep close tabs on all of its projects.

“As owner’s representative and construction manager of Romea, Imperial installed a large team at the shipyard from day one, and every exterior and interior detail was supervised from the very start by Imperial in respect with the owner’s requests and budget,” says the company’s chairman, Evgeniy Kochman.

In this case, the company is also involved in managing the charter program and helped select the 23-member crew, carefully chosen and trained to offer a five-star or even six-star experience. They are assisted in this task by a logical and practical layout dedicating two decks to their quarters, galley, split-level engine room, garage, laundry and stores.

Imperial dismisses parallels to previous vessels. Involved from the get-go in the extensive specifications, the company stresses that Romea is a custom project whose elegance mirrors the owner’s good taste. “Romea clearly doesn’t look like any other superyacht; her interior and exterior layout are completely made to suit the owner’s requests,” Kochman says.

“The layout was selected by the owner in close collaboration with Terence Disdale and Imperial. It is built mainly to satisfy his requests while on board. Charter clients will recognise this process while living on board; every single element was designed to make your journey unforgettable.”

Disdale says one of the yacht’s strong points is the “practical layout that rotates from the central stairway leading through the decks up to the sun deck”. An elevator, clad in stainless steel details polished to a jewel finish — “You can’t imagine how much work we did on it,” says von Krause — provides an alternative to ascending the comfortable stairs to the top, where a private sun deck with Jacuzzi is located.

Privacy is also paramount in the owner’s area, which takes up about half of the upper level’s interior accommodation with a cabin for children, an ample study, identically sized his-and-hers baths, dressings and a spectacular bedroom. A privacy wall/headboard anchors the bed, which sits at the centre of wraparound windows offering views of a discreet terrace and the sea beyond. The owner’s guests certainly won’t feel shortchanged, their cabins vast, comfortable and enjoying a prime location on the main deck.

Despite imposing dimensions, no one space feels either too large or underutilised. Wide passages outside provide a sense of ease that is replicated inside with great headroom. Soothing colours and meticulously selected materials, including oak, leather, silk and stone, live in perfect harmony. While ever consistent, the décor is not repetitive. “Too much matching decoration from space to space will create a ‘corporate’ environment without any visual surprise,” says Disdale, who also avoided the “startling wow factor”.

Although the interior was developed in close consultation with the owners and their representatives, Disdale says, “The overall philosophy of the interior is not really a departure from our day-to-day mantra of avoiding glitz and visual ostentation in decoration.” The goals were to “create a calm environment, easy on the eye but including finishes and detail that entertain the eye as well as the mind,” and, Disdale adds, “above all, create an environment that functions as well as being aesthetically pleasing.”

The styling of RoMEA reflects the owner's immaculate tastes

There is a great sense of ease moving throughout the decks. To make room for a wide corridor enabling guests to get to their soundproofed cabins, the designers chose to “pinch” the space a bit at the bathroom level rather than taking away from the staterooms.

Shapes, sounds, lights, art and even smells all work in concert to envelop guests into an atmosphere of utmost comfort. Feet can also participate in the discovery of sensations, from thick silk carpets that surround the toes to round pebbles that massage the soles. And if you happen to be tall enough, you can also feel with the tip of your fingers the texture on the ceiling, created by a British artist.

Behind this sense of ease is an elaborate process of creation. Disdale, winner of Boat International Media’s Lifetime Achievement Award in 2014, has spanned the globe in search of new ideas and finishes that grace the interiors of several of the world’s most iconic yachts. Romea is only the second yacht he has designed to be built at A&R, but he’s already made his mark.

Von Krause, who visited the iconic design firm in Richmond, UK, and marvelled at the samples available for clients to peruse, shows a real appreciation for Disdale’s unique creative process, even if it may add a little to the complexity of building a superyacht. Von Krause estimates than no fewer than 250 trucks transported goods to and from the German yard when it came to outfitting the yacht.

“The logistics can become a challenge in production when the fitted furniture is made in Germany and shipped to South America to be finished with dried cow horn, lacquered and returned to the vessel,” says Disdale, “but that is typical of what we do in our constant search for new finishes.”

As for Imperial, what they sought to do was “simple: deliver a state-of-the-art motor yacht within time, costs and quality deadlines,” says Kochman. “And Imperial is delighted to confirm that we achieved successfully the task.” With art from all over the globe, Romea is truly out of this world but also remains very rooted.

First published in the March 2016 edition of ShowBoats International