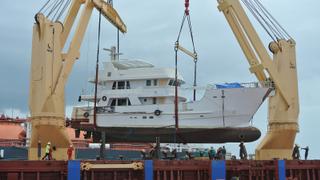 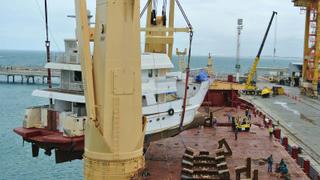 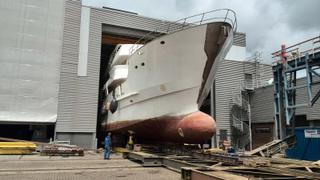 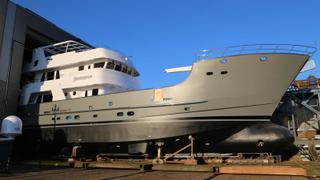 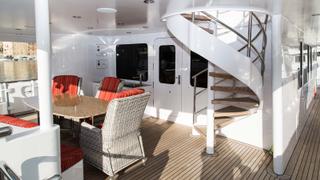 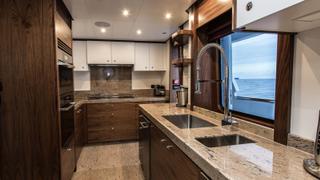 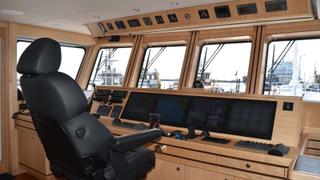 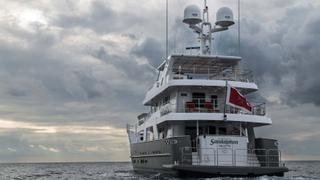 Sandalphon: Inside the refit that gave 27m explorer a new lease of life

After a rough start in life,Sandalphongot a second chance to give her owner the retirement of his dreams, learns Sam Fortescue...

We call this ‘the gigantic party room upstairs’,” says skipper Robert Wattam, sweeping his arm across the upper saloon. “When the boat was in Morocco, the owner brought a group of five traditional musicians back to the boat and two ladies to cook lamb couscous up here. There was a great atmosphere.” This feels like the heart of Sandalphon, the 31 metre explorer yacht that has drawn me to Limassol in Cyprus, and on whose top-most deck I’m now standing, watching the sun go down over the marina with the smell of orange blossom in the air. It’s the perfect scene – but an unlikely one, because at one point it looked like Sandalphon would never hit the water at all.

Work began on her (then) 27 metre hull at a shipyard in Brazil in 2014, but the project soon ran into problems. “They were running late and not to the timetable,” the owner explains. When he and other owners tried to take their boats elsewhere, they hit legal problems. “The law was on the shipyard’s side, so it made it very hard to remove the boats.”

The half-finished hull of Project Gisele, as she was then known, was left to rust in the humid, tropical air of Fortaleza. This could have been the graveyard of the owner’s yachting ambitions too – at least one sister boat was never completed. But he didn’t consider backing away from the project. “Never!” he tells me. “It was a big dream to have an explorer yacht. I am retiring to my yacht.”

Rescue came in the form of Daan Balk, the owner of Balk Shipyard in the Netherlands. He was at the yard for another explorer boat client when he spotted Project Gisele in distress and took a closer look. “Wow, this is really something,” he remembers thinking. “When you come to a project like that, the problems you see in the first couple of hours just increase. The first day I just absorbed what I saw, then I had my serious thoughts about it overnight and the next day I could see how we could tackle this one.”

He rang the owner from Brazil to offer his services, shrewdly offering free berthing in Holland while the owner decided on a yard. “It wasn’t easy, but I was able to convince him, so he took the decision to bring the boat over to Holland,” says Balk. A series of different teams were brought in to quote for the work but, in the end, Balk’s persistence paid off and it won the contract. “The Dutch are the best at this size of yacht, and Balk is very good at this type of work with high standards,” the owner explains.

And so a two-year project began. “From our perspective it was only 20 to 30 per cent finished,” says project manager Wim Mooiweer. “Basically, the whole boat had to be ripped apart, except for the furniture.”

Captain Wattam joined the boat shortly before her completion in Holland, and got to know the Balk team well. “They worked out very quickly that she was listing 10 to 15 degrees to one side,” he tells me in Limassol, where the boat is floating perfectly. The original Brazilian design was based on a larger boat, he explains. When they shortened it, they kept the superstructure dimensions the same, skewing the boat’s proportions. “Balk could either make her ugly or add four metres to the length to fix the problem.”

Balk opted to extend and, with input from naval architects Azure, the yard extended the bathing platform by one metre and sawed the hull in half just forward of the main superstructure to add three more metres. Technically, the challenge was to weld in new plates and structural parts without the heat distorting the existing hull. Practically, it gave them more space to play with internally, creating an additional twin crew cabin and a generous laundry room. “We got a much better layout, more practical, not to mention a much better look from the outside,” says Balk.

Mooiweer then turned his attention to the engine room, where his technicians spent a long time. “All systems were more or less in place, but none were finished,” he says. “The components used were not bad ones – all American standards. [They were] the right engines, pumps and generators.”

The twin 449hp Caterpillar C18 engines were fully serviced, while the shafts and the props were removed and returned to the manufacturer for an overhaul. Mooiweer adds: “Everything except for the engines was taken off board, so we could do the bilge painting, sandblasting and rewelding of the tanks. It’s almost like going into a refit, but a rebuild at the same time.”

This process proved absolutely crucial to the project. As Wattam puts it: “They fixed it by pulling everything out – just as well, because the systems were missing lots of bits that you wouldn’t have discovered otherwise.”

With twin Kohler 40kVA generators and a host of features, including water treatment, a built-in used oil reservoir and four ABT TRAC stabilisers, the boat is now ready for anything. Skipper and crew of two had a chance to put the whole system to the test almost immediately. “Coming out of the English Channel in five metre swells and 40 knot winds, we turned left so we had it on the beam. I expected the worst, but she was stable,” says Wattam.

Despite her workboat looks, Sandalphon offers plenty of outside space. Below the 50 square metre sundeck, shaded by a permanent bimini, there is a more private middle deck, then the main deck aft with a wide sofa and marble-topped table. The day is a procession from bottom to top: breakfast at the table close to the galley and evenings enjoying the breeze from up top. And if you cleared the two tenders – a big six metre RIB and slightly smaller jet tender – from the forward deck, you’d suddenly have room for a party of dozens. “The owner is thinking about what he can do with this space, but hasn’t reached any decision yet,” says Wattam.

The yacht has a practical, no-nonsense interior. She is simply carpeted in the saloon and cabins, with built-in sofas upholstered in brightly striped Brazilian fabric. The walls and doors are in light maple and the bathrooms fitted out with contrasting tones of marble. She is largely unadorned with artwork or mementos of any sort – perhaps in readiness for the owner’s planned round-the-world trip. “It may take six years or 15 years, there is no hurry. At the moment we are in Turkey on the south coast with no other boats and brilliant weather,” the owner says.

When you have a vision it is hard to let go, and this owner chose to see it through to the end. True, the final cost was roughly what Balk would have charged for a new build. But now he is sipping claret in the upper saloon, working out exactly where he wants to take the boat, while some of the sister hulls still remain unfinished. Perhaps it’s appropriate then that he has named his explorer yacht after an archangel; there is something of the miraculous in the way that this project was resurrected from the rust and dust of failure.

As Project Gisele, the hull and superstructure were supposed to be painted white. But Balk was far from happy with the finish. “In some places, we found two centimetres of filler on the superstructure part,” Wim Mooiweer says. “On the whole it wasn’t that bad, but we had to do some tests, because we couldn’t guarantee the adhesion of the filler.” Even after the hull was repaired and extended, Balk wasn’t happy to go for another gloss finish, because it would show the imperfections in the hull too clearly. With a tight budget, they settled instead on a “mousey” matt grey from Italy’s Boero Yacht Coatings. “In the end it worked out that we picked the right one, because the hardness was similar to the original,” Mooiweer adds. “We had to find systems to work with the budget we had.”

Although Sandalphon has spent the last season pottering around the Med, there is nothing to stop her from crossing oceans. Her Caterpillar engines propel her at a cruising speed of nine knots with such efficiency that her huge 40,000 litres of fuel tankage give her a range of more than 4,000 miles. “I have to cross the Atlantic or the Pacific and we will see from there; it will be a new experience,” the owner tells me. Details are still fluid, but there is talk of crossing to the Caribbean in 2019, exploring the US East Coast, before tackling Panama and continuing west. “I want to cruise all of the warm world and the main cities of the world,” he adds.

Bystander: Inside the refit of the classic America’s Cup tender

Inside the revolutionary refit of 70m superyacht Sherakhan