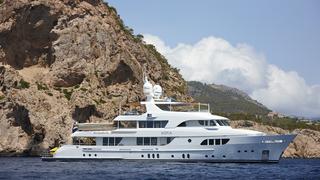 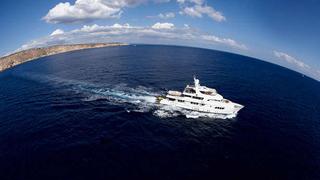 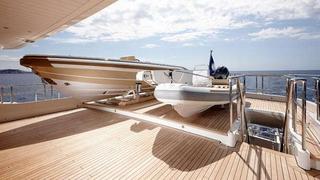 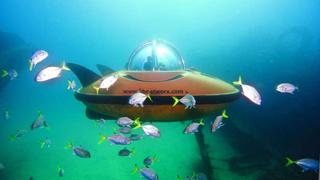 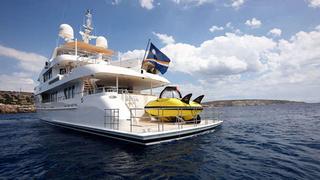 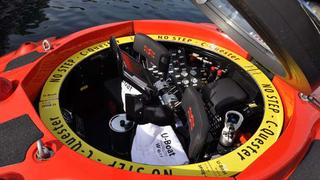 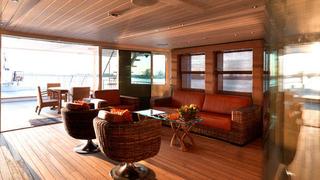 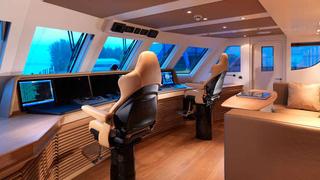 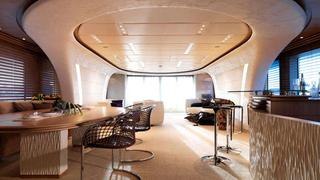 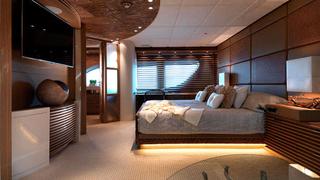 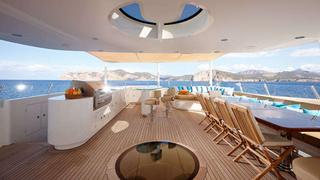 Sofia _is a crossover between a go-anywhere expedition vessel and one of the traditionally styled motor yachts that have made Moonen Shipyards’ reputation. A custom project for a repeat Moonen client (who is now a majority shareholder in the yard), 42 metre _Sofia pushes the boundaries of innovation for a yacht of her length. Her visible highlights are obvious, including, but not limited to, the yellow submarine on her transom, but it’s really the statistics that speak to her technical achievement.

After extensive sea trials, _Sofia _notched up notable noise and vibration results. Whisper-quiet figures as low as 40 decibels were recorded in the cabins, and by the engine room the sound stayed under 46 decibels even at 11 knots. Vibration tests were equally remarkable: 0.3 in the cabins (compared to an acceptable Lloyd’s Class 1 level of 1.8) and 0.4 in public spaces (Class 1 level is 2.5). Moonen is known for its noise and vibration attenuation through propeller clearance, insulation, flexibly mounted interiors and air-supported generator cushions. But until this point, it has built only smaller yachts; to have repeated the feat on a much larger scale is impressive.

The essence of customisation is that things can change – and they certainly did on this yacht as the owner extended her by over a metre several months after building started.

‘Having already created two yachts together – a Moonen 84 and a 97 – we knew the owner’s preferences and expectations,’ says Emile Bilterijst, Moonen’s managing director. ‘Sofia’s initial design evolved organically out of ongoing discussions, starting at 110 feet (33.5 metres) then moving up to 125 feet (38 metres). (The exterior designer) René van der Velden was briefed to synthesise rugged adventurous looks with superyacht style elements, and his initial designs had a slight explorer feel combined with raked aft decks. They immediately hit the spot, and the owner was also pleased with the tender placement, considering it a waste of real estate to keep his seven metre Novurania in a garage.’

A letter of intent was signed in early 2009, around the time that personal submarines started appearing on the superyacht market. They struck a chord with Sofia’s owner, a keen diver. He loved the idea of sharing the pleasures of the deep with guests less willing than he to don a wetsuit. One of the final changes to the general arrangement before the build got under way was the addition of a two-person sub. This was in early 2010, when the contract was signed.

Eight months later at the Monaco Yacht Show, Bilterijst trialled a submersible craft, taking a plunge below the waves on the owner’s behalf. ‘Stepping aboard, I realised that to take a guest with him and be able to enjoy the view himself, the owner would need a pilot,’ he says. ‘But no other motor yacht close to Sofia’s size carries a three-man submersible.

The new submarine – a C-Quester 3 from the Dutch firm U-Boat Worx – dramatically shifted _Sofia’s _weight distribution. At four-and-a-half tonnes, the submarine was 50 per cent heavier than the specified craft and required a much heftier crane to launch and deploy. This in turn entailed fitting an extra tank in the yacht’s forward section to counter the weight, while the stern platform had to be stretched, bringing her to her final length overall of 42 metres.

The sub can take three people to a depth of 100 metres, and Sofia is the first superyacht under 50 metres to carry such a craft. It requires a unique launching system that fully meets Lloyd’s and MCA compliance. The sub is set into the platform and when launched it leaves space for a huge beach club – or a great area for diving and watersports – with the crane serving as a mooring pontoon for the tenders.

‘Using a submarine of this sophistication entails other challenges,’ says Sofia’s captain, Ian Westman. ‘We’ve trained two crewmembers as pilots and the rest as surface officers in order to ensure smooth topside ops. You cannot simply splash a four-and-a-half-tonne craft into the water and go for a spin beneath the waves. From pre-dive preparations to the moment when the sub is back on board Sofia takes around six hours. Precautions include 24-hour global assistance for hyperbaric chambers, three backups to the primary system and 96 hours of emergency operation. This craft is like an aeroplane in its complexity, and feels like one when you’re sitting in her.’

Three years after the decision to install a bigger submarine, the owner is justifiably proud of the outcome. ‘I knew these were major revisions but René van der Velden and the naval architects at Stolk Marimecs were up to the task,’ he says. ‘Crucially, Moonen proved its flexibility and uncompromising commitment to fulfill client wishes. The yard handled my complex modifications with minimal delay, while still creating a yacht with maximum safety, functionality and redundancy. What’s more, Moonen successfully implemented new building techniques, new materials and top-of-the-line equipment and systems. There is much more to Sofia than her submarine alone.’

Her systems are state-of-the-art, from the integrated bridge to the Kaleidescape entertainment system with multi-room control via iPad (including lighting, blinds and climate), and from the thermal camera on the top mast and military-grade satcom to the man-overboard system with personal tracking.

The pièce de résistance is the roomy main saloon. Here, Concetto stone with translucent backlighting, as well as sculptural foam elements, encased in backlit coconut paper, conceal air outlets and engine room ventilation shafts without hindering airflow from hidden air-conditioning units. The layout of the atrium further enhances the sense of spaciousness. With the bridge deck lobby on the port side, entering the main deck on the starboard side provides an unusual aspect compared to more traditional layouts.

‘One of the things that made this main deck arrangement possible was our research into fire partitions, which have been made virtually invisible on the main deck,’ says Art-Line’s Frank Pieterse. ‘Sofia _is the first boat on which we have managed to integrate the fire screen into the ceiling, which is why the staircase area and lounge are so open. This is an essential technical issue when a client desires open spaces. The yard had to convince the class societies that this solution would work, and the owner was very supportive. All too often, owners buying a larger boat go for more of the same on a larger scale, but this was certainly not the case on _Sofia.’

On the lower deck there is no corridor – the bottom of the staircase is immediately accessible to four cabins. ‘It looks simple and symmetrical but it’s actually quite a feat to achieve the right space division,’ says Pieterse, who, along with colleague Marilyn de Vaal, also creates interiors for luxury houses. ‘A boat should reflect the lifestyle of her owners to the same extent as their onshore accommodation,’ says Pieterse. The full-beam master and four guest suites are comfortable and cosy with the same colour scheme and use of zebrano and oak.

The working areas aboard benefited from collaboration between the designers and the crew. The galley was developed in consultation with food service equipment specialist Beuk Horeca International and Sofia’s chef. It includes features such as drainage gutters, astutely placed vents, soft-closing cupboards and an efficiently designed food service line.

The megayacht has the Mediterranean, the US East Coast and The Bahamas on her cruising schedule, and Alaska may also be on the horizon – including some glacial water diving. Meanwhile, the owner is already considering an even larger project. With plans afoot to increase the building capacity at Moonen, Sofia may not hold the yard’s size record for long.