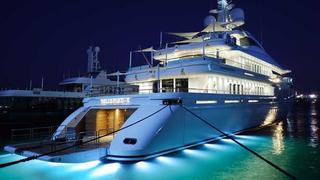 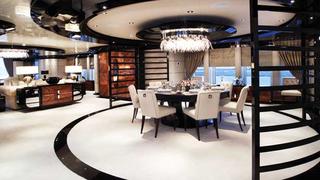 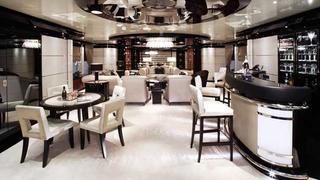 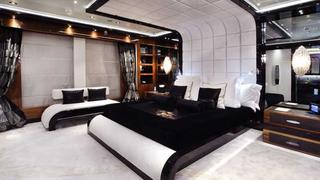 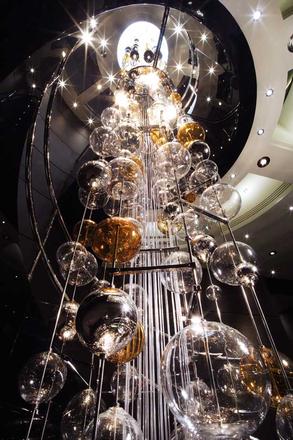 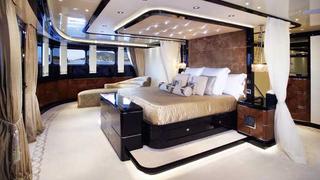 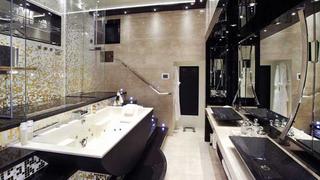 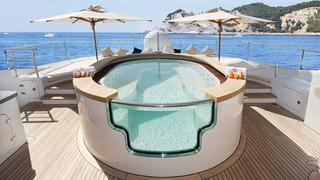 The new 70.54 metre Talisman C is the second yacht to bear this name, following the very successful 54.2 metre that was delivered by Proteksan in 2006. The family that commissioned both these yachts had a great affection for ‘T1’ but felt that very significant improvements could be achieved with a larger hull. The owners wanted to be able to carry more tenders and water toys and unless these were allowed to take over the best deck spaces, a garage became a necessity, while a substantially longer hull would be able to retain the ‘low and lean’ appearance of the previous yacht.

The net result is a full-width aft garage with lift-up clamshell doors on each side and extending overhead cranes. It’s a very well-stocked toy cupboard, and includes a Nautique Super Air 230 specially designed for wakeboarding, which can also be used as a dive tender. Among the five Sea-Doo PWCs is a Wake Pro capable of towing a skier; in fact, the 215hp Rotax engine has sufficient power to keep a decent-sized light aircraft aloft. For those guests who prefer not to hear the constant buzz of small engines, there is a Laser dinghy plus a selection of windsurfers and canoes. The ‘respectable’ tender, for going ashore without getting soaked, is a Novurania Chase 23 with Yanmar inboard diesel.

Side access to the garage has made it possible to develop a beach club at the stern. A very large transom flap hinges down to the horizontal, creating a huge open deck just above the waterline; this is carried through into the lazarette area of the hull where one finds a central stairway to the main deck and a door into the garage. The ‘beach’ can have a number of uses, including boarding tenders or swimming, but also as a very special place to sit and relax with feet practically in the sea, a feature the owners first noticed on the 60 metre motor yacht Blue Eyes.

In most other respects, ‘T2' is simply larger: there are additional features such as a gym, a games room and a VIP cabin, but on board a yacht, space is the ultimate luxury and this one has plenty. Although all the boxes have been ticked that could make T2 a legal charter yacht, the owners’ intention is to undertake a world cruise first and this will involve a considerable turnover of family and friends, depending on who is available. Spacious cabins, generous public spaces and a great variety of deck areas will make this a pleasure comparable to having a private ocean liner.

H2 Yacht Design and its boss Jonny Horsfield received the ultimate endorsement of a repeat commission to develop the sophisticated, art deco-based interior used on T1. The interior of Talisman C, launched in 2011, is smart, modern and high contrast both in shapes and materials. What this means in practice is voluptuous curves limited by sharp edges, soft materials such as suede or pony skin bordered by marble and outlined with polished stainless steel or chrome. Walls are surfaced with shagreen and chairs upholstered with ‘mock croc’.

Above all, there are strongly contrasting colours, such as black lacquered woodwork against off-white wool carpets. Floors are often in dark, sparkly marble with underlit onyx providing the dramatic point of interest. This style is particularly clearly expressed in the VIP cabin, which has black soft furnishing and white pony hide walls carved into squares that curve over the bed, which is a surprisingly restful effect.

Dramatic, eye-catching details abound: the spiral central stairway winds its way around an extraordinary artwork made of glass balls on stainless steel rods, with hanging fibre-optic strands that create an ethereal light. This eye-catching piece of work was designed and made by Crystal Caviar of the Czech Republic. The corridor that leads into the owners’ quarters has a lobby with circular back-lit onyx panels that apparently bring the same response from virtually every visitor: ‘Beam me up, Scotty!’

Glass-work is a strong feature and there are two quite amazing chandeliers in the saloon and dining room that look like the tentacles of a huge sea anemone suspended from the ceiling. They look particularly attractive when lit and indeed the whole saloon area is much more interesting under artificial light when the Lutron ‘mood lighting’ comes into its own.

The starship Enterprise never had a bridge as impressive as the one on Talisman C. Both beautiful and practical, it matches a fully electronic display outfit with good practical features such as a real chart table with blackout curtains and red lighting and a special niche to one side of the main console, where the watch officer can stand right up against the windows in bad visibility. With vertical glazing in a 180 degree curve, the view is excellent in every direction except directly astern. Another good point is the full walk-round deck on this level, allowing the crew to reach any part of the vessel without having to dash up and down stairs.

The same 180 degree curve of windows is enjoyed in the owners’ cabin, one deck below. In addition to the excellent view there is a small outdoor sitting area, which would be delightful with the yacht at anchor though normally too windy when under way. The owner’s suite is on two levels and the most unusual feature is that the change of levels is made in the bathroom, with the spa bath on the lower level and shower up above, creating a very striking compartment.

Another feature that will be especially enjoyable when at anchor is the ‘crow’s nest’, a small deck cantilevered from the radar mast and reached by steps from the sundeck. The view from here is unbeatable, while sun worshippers will find it provides a high degree of privacy. The sundeck is huge, with a pool of almost Olympic size forward and a choice of open or shaded space aft.

A big advantage of reaching the magic figure of 70 metres overall length is that it enables all the crew and technical spaces except the main galley to be placed on the lower deck.

The largest yacht to emerge from the Proteksan-Turquoise yard so far is certainly an impressive vessel and is a very beautiful one with an excellent layout and impressively high standards – a fitting successor to the original Talisman C.