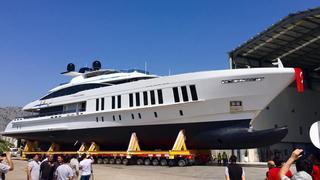 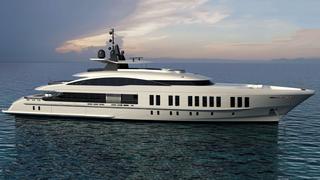 Alia Yachts has launched its 60.2 metre superyacht Project Samurai. The yacht, which was previously kept under wraps, is currently in build and when launched will become the Turkish yard's new flagship.

Last year Alia Yachts realised a dream with the launch of 41 metre Rüya, and Project Samurai marks another important step for the relatively new shipyard.

Alia described the yacht as having “a revolutionary, patented hull form, achieving unprecedented efficiency through the power curve to a top speed of 21 knots, with a marathon cruising range of more than 5000 nautical miles”.

The full beam master suite and four of the guest cabins can be found on the main deck. All of these cabins have great views thanks to full height windows. A fifth guest cabin on the bridge deck means that Project Samurai can accommodate up to 12 guests.

The main deck interior features a large saloon and dining area and the bridge deck has a relaxing TV lounge.

The crew area, galley, engine room and tender garage are all well laid out on the lower deck, leaving space aft for a generous beach club and gym.

The beach club is connected out to the water via the folding swim platform. Stairs on either side lead up to a lounge area on the main deck aft.

More stairs lead up to the bridge deck aft, where there is sheltered al fresco dining. The curve of the superstructure protects the table area to allow comfortable dining while underway or in a windy anchorage.

Project Samurai is scheduled for delivery later this year. Alia's 30.5 metre Project Nozomi is also due to be launched in 2016 and features exterior design by Omega Architects.