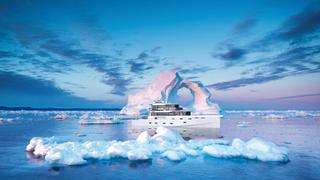 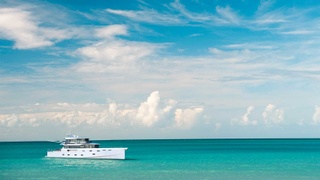 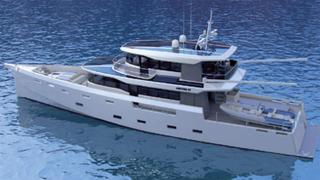 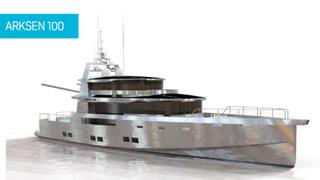 Fledgling explorer builder Arksen will begin construction on the first hull in its 26.2 metre Arksen 85 series in the coming months, the builder has revealed.

Arksen updated press about the progress of the first hull in its 85 autonomous hybrid explorer series at the 2020 Boot Düsseldorf boat show.

Speaking at the show, chief operating officer Ewan Hind said the first 85 was approaching the beginning of construction.

"It's a really exciting point in our journey to be getting our first boat in build," he said.

He also revealed the builder had "spent a long time developing and refining the Arksen explorers" since the fleet was first revealed at Boot Düsseldorf last year.

"We’ve evolved the design, looking at the outside spaces and refining those (...) and looking at the interior design and the materials from a sustainability point of view."

It comes after Hind told BOAT International that Arksen's designers had also been "finalising" the 23 metre Arksen 70, with the model "proving very popular". "The Arksen 70 makes up a large part of the enquiries [Arksen] receives," he said.

"The 70 will also be ready to commence build in 2020 alongside the Arksen 85, Hind added. "The project has been progressing well since our launch in January last year and has been going from strength to strength with the expansion of both our technical and management teams."

Arksen teamed up with a team of industry veterans to develop and build the fleet, which ranges from 23 metres to 30 metres. This includes the Isle of Wight-based Wight Shipyard, naval architects Humphreys Yacht Design and interior design firm Design Unlimited.

The 23 metre Arksen 70 is the smallest model of the fleet. It has a 6.25 metre beam, full beam master and can accommodate a total of eight guests on board.

The 26.2 metre Arksen 85 has a beam of 6.8 metres and can accommodate a total of 14 guests. It was revealed at Boot Dusseldorf 2019 that the builder had sold its first Arksen 85 to a British owner.

The biggest of the fleet, the 30 metre Arksen 100, has a beam of 7.05 metres and can accommodate 14 guests with crew accommodation located forward.

All three models have reconfigurable interior layout and enough storage for three months at sea. They are designed to be manned by minimal crew and a 50 year service life.

Smith said the ownership model was to ensure "more people move away from the status quo where a boat sits in a marina unused for 95% of its life."

Speaking at the Dusseldorf launch last year, Arksen's Nico Wills said: "We believe that if you're lucky enough to own one of our vessels then you have a responsibility to give back to the ocean."

As part of this new ownership model Arksen offers a guaranteed buyback option to owners.

"You can buy our vessels and be secure in the knowledge that when the time comes, if it comes, you can sell immediately," Smith said.

Additionally, Arksen has launched an Explorers’ Club to help owners realise their dream adventures. It offers four signature itineraries, which are inspired by famous explorers such as Fridtjof Nansen and Jacques Cousteau and venture to locations including Svalbard, Easter Island and the Falkland Islands.