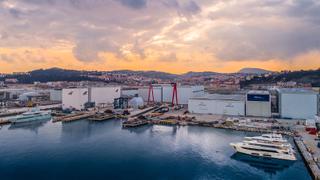 CRN has announced the sale of its first yacht to an American client - a 60 metre fully custom aluminium hull currently known as 141.

Nuvolari Lenard has designed the interior and exterior of the yacht, which was announced by Ferretti Group chief operating officer Stefano de Vivo at the Miami Yacht Show. The design has also been developed by the yard’s technical office.

The yacht will have a 1000GT volume and has been sold to an American owner. Details are scarce, but de Vivo did reveal that it will be “a fast boat”, cruising at full load at over 21.5 knots.

Images and drawings of the new project are not available, de Vivo revealed, at the request of the owner. “Unfortunately I can’t show you any images, not even a sketch because the owner is very, very private and they said that until the boat comes out of the yard they’d like to keep it to themselves.”

The project comes after the yard announced it had sold a 70 metre 139 yacht designed in partnership with Vallicelli Design.