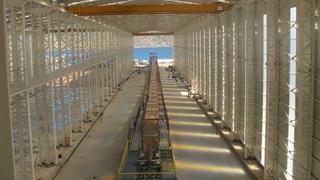 Dream Ship Victory has begun work on the record-breaking 141 metre sailing yacht Dream Symphony, for which it has purpose-built a 200m construction shed.

The Turkish yard decided that the extension to its Marmaris base was necessary to accommodate the construction of the vessel, which will be the largest sailing yacht ever built. Dream Symphony’s keel has now been laid at the site. Ken Freivokh, who designed the yacht in conjunction with Dykstra Naval Architects, also had to think outside the box to do the enormous yacht justice.

‘I’m particularly proud of developing a design that actually suits the scale of the yacht, because many large yachts are really just pumped-out small yachts,’ says Freivokh, principle of Ken Freivokh Design. ‘We have taken all the opportunities that the size and the length afford us to make all the amenities and the spaces proportioned and useable.’

‘It is quite a challenge – for example, how are you going to do simple things such as serve food? There are cleverly sited pantries with dumb waiters. The yacht has a very good infrastructure – we segregated the crew from the guests so they don’t get in the way but we can also serve all the needs of the yacht seamlessly behind the scenes,’ he says.

Despite these unusual features, Dream Symphony is a more traditionally rigged yacht than comparable Freivokh/Dykstra collaboration the Maltese Falcon. This vessel is more reminiscent of traditional large yachts, with wooden construction. In the interiors Freivokh took advantage of the bare beauty of boats made in this way.

‘We developed a style that exposes the fact of how it’s built, so it’s a combination of largely wood, with some carbon and stainless steel. We’re not trying to hide everything and pretend it’s a palace. It’s a bit like some of the higher performance cars – you would expose certain things internally, says Freivokh.

Back at the yard, the new facilities are helping Dream Ship Victory to make these designs a reality. The main shed in its present form can accommodate yachts up to 160 metres, with an array of overhead cranes, climate control and support facilities, including offices and accommodation facilities all on site.

In parallel, work is also progressing on both the 55 metre Princess Maria and the 43 metre Imagination, while the 63 metre Mikhail S. Vorontsov is nearing completion at its fitting-out base at Balk Shipyard in the Netherlands.