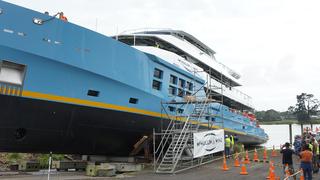 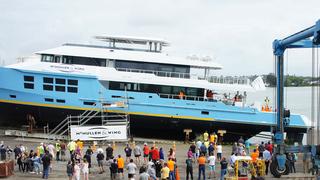 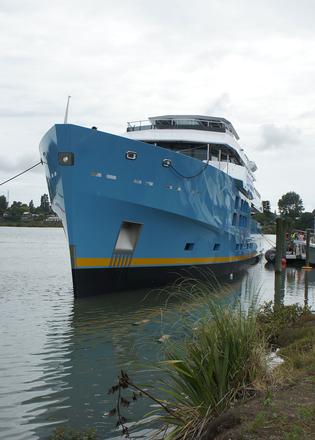 Project 1016 has been launched at McMullen & Wing’s Auckland shipyard. The 50 metre explorer yacht has an impressive range of 6000 nautical miles, making it capable of crossing any ocean.

Project 1016 is the largest yacht to be built by McMullen & Wing and is the second superyacht in the New Zealand yard's Diamond series. The first was the world cruising 45 metre superyacht Big Fish. Both yachts in the series were designed by naval architect Gregory C. Marshall.

The hull of the explorer yacht is made from steel and has been painted a distinctive sky-blue colour. This blue hull combines with the bright yellow boot stripe at the waterline to make Project 1016 instantly recognisable.

The white superstructure is built from aluminium, with large windows providing great views. One of the most notable design features of Project 1016 is the lowered aft cockpit, which forms a protected area for fishing and lounging.

Not much is known about the Gregory C. Marshall designed interior, but it has four guest cabins and a master suite to accommodate up to 10 guests. Interior views from the main deck will be improved by lowering the folding bulwark balconies.

The build suffered a major setback when the yacht, then known as Project Star Fish, was damaged in August 2012 by a fire at the New Zealand yard. Later that year the project was then sold with the damaged hull requiring a new superstructure.

Now that it has been rebuilt and launched, Project 1016 will undergo finishing touches and sea trials before delivery. The official name is being kept secret for the time being.

Big Fish sails in Darwin’s footsteps in the Galapagos Island