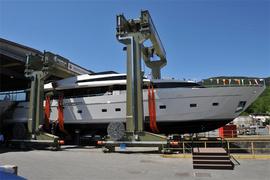 The Summer season is approaching and the rhythm of launches continues to gather pace with no less than two Sanlorenzo motor yachts splashing during the last week.

The first one is another hull from the successful 27m SD92 series. Christened Mia Rocca IX, she is the sixteenth hull of this semi-displacement model which debuted in September 2007, and the third SD92 launched in 2011.

Both yachts will be delivered this Summer.