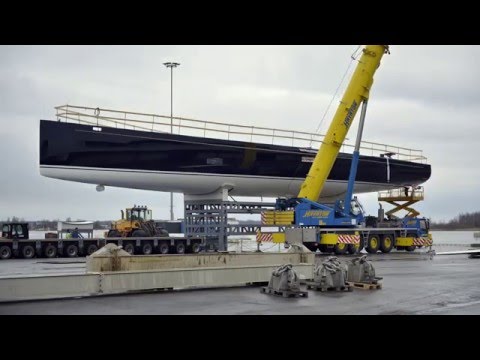 Finnish sailing yacht specialists Baltic Yachts have released a time-lapse video of the Baltic 130 Custom as it leaves the shed and has its retractable keel fitted.

The Baltic 130 project was announced in August 2014 and the finished yacht is due to hit the water later this year.

Built from a carbon-fibre sandwich construction, this single-masted yacht features a plumb bow and a wide stern, as specified by the new owner, who is a keen regatta sailor.

In addition to the retractable keel shown in this time-lapse video, the auxiliary propulsion system will also be retractable, making the Baltic 130 well suited for exploring shallow coves and remote anchorages.

The new sailing superyacht will be even larger than Nikata, a Baltic 115, which won the Judges’ Special Award for Design & Performance (Sailing Yacht 30m to 39.99m) at the recent 2016 World Superyacht Awards.

The current flagship in the Baltic Yachts range is the 46.21m Pink Gin, although the Finnish yard is currently working on a 53.9m Baltic 175.