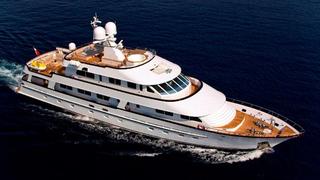 Vesa Kaukonen at KK Superyachts sends news of an Open Day on the 38m motor yacht Callista in Monaco's Port Hercule on November 29th between 12pm and 5pm.

Built by Ocean Pacifico in 2000, Callista accommodates 10 guests in a master suite and four en suite guest cabins, three of which are doubles and the other a twin. Her guest areas include an upper saloon and extensive deck areas for entertaining, particularly the sundeck with its spa pool, shower, sun loungers and massive sun bed. She has a cruising speed of 11 knots and a range of 4,400 nautical miles.